Looking for some LGBT+ chapter books for your young reader?

Finding LGBT+ (lesbian, gay, bisexual, trans and more!) chapter books for young readers can be difficult. Representation does not always come with labels on the books, so to help, I created this LGBT+ chapter books list for easy access to titles available through our catalog.

Check out some of these fun titles from the list!

Rick is struggling with his identity. He’s never liked a girl, but he’s never liked a boy either. He’s never felt any way about anyone, ever. As confusion arises, Rick must also process the relationship with his friend, Jeff, who is outwardly aggressive towards individuals on the LGBT+ spectrum. As Rick learns more about this new community, he must learn to stand up for others, and, potentially, himself.

“The Prince and the Dressmaker” by Jen Wang

Frances is living at low wages, employed by a gown designer. Sebastian wants to wear beautiful dresses. A single ball, and a dress made for a very happy client, brings them together. Sebastian asks Frances to become his full-time, personal dress designer. Frances is the key to Sebastian’s personal happiness and Sebastian might be the only way for her to become a professional dress designer. However, it’s hard to be a prince with a secret identity. ALSO: Rumor is that this title may soon be turned into a movie!

“The Best Man“ by Richard Peck

Archer’s got a bit of a track record with weddings. There have been two significant ones in his life. The first one was a bit of a disaster that ended up on YouTube. The second one looming over him now is his uncle Paul and his favorite teacher, Mr. McLeod. When I first cracked open “The Best Man,” I enjoyed how absolutely hilarious it was. Our narrator, Archer, tells his story with such honesty and humor that it’s easy to lose track of time reading this one!

“Ashes to Asheville” by Sarah Dooley

After the death of her mother, Fella is forced to move in with her grandmother, as her grandmother is the closest “biological” relation she has left. This move takes her away from her other mother, Mama Shannon, and her sister, Zany. Fella is not prepared for this change. One night, Zany breaks in and steals Fella’s mother’s urn. Zany believes they must fulfill their mother’s last request to spread her ashes.

“Ivy Aberdeen’s Letter to the World” by Ashley Herring Blake

Ivy Aberdeen draws pictures in her notebook of girls holding girls’ hands. For some reason, it feels out of place compared to the boy-girl holding hands that she’s seen before. Ivy keeps her drawings secret, confused about how she feels, when a tornado rips through her town and dismantles Ivy’s house, displaces her family, and all of Ivy’s drawings disappear. Ivy lives in fear of others finding her secret. 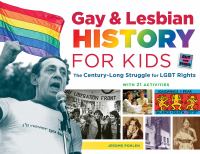 As an adult, I found this one important to read. It’s set up like a textbook with separate sections on different topics. I found it informative on LGBT+ history and super accessible to read.