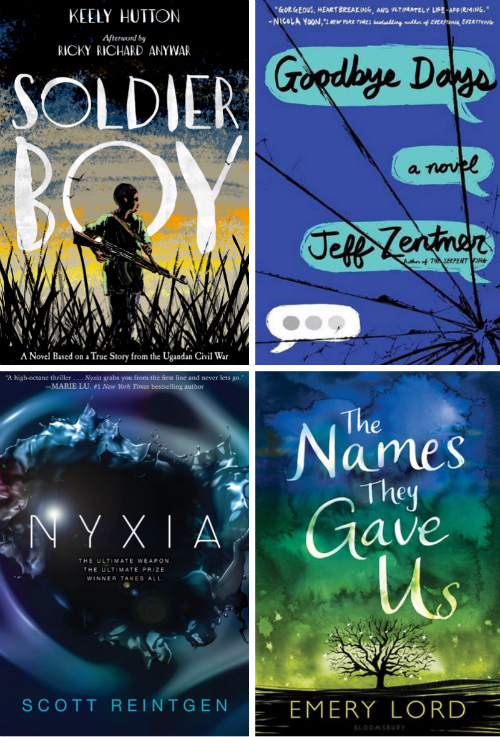 The Gateway Readers Award honors a young adult novel that is selected by Missouri high school students. To be eligible to vote, students must read at least three of the finalists. Voting will occur at participating schools early next March, so you can use the summer months to get crack-a-lackin’ on this list! The winner will be announced in April 2020.

“The Hate U Give” by Angie Thomas
Starr Carter witnesses her friend’s death at the hands of a police officer. Her life gets complicated when the police and a local drug lord try to intimidate her to learn what happened the night Khalil died.

“The Names They Gave Us“ by Emery Lord
Lucy was ready for a perfect summer hanging out with her boyfriend, working at Bible camp on the lake and spending quality time with her parents. When her mom’s cancer reappears and long-hidden family secrets emerge, Lucy must discover what grace really means.

“Dear Martin” by Nic Stone
Feeling caught between two worlds, college-bound Justyce McAllister struggles against prejudices of race, class and social norms. He looks to the teachings of Martin Luther King, Jr. for answers, but gets sidelined when caught in the crosshairs with the police.

“Nyxia” by Scott Reintgen
Emmett accepts an interstellar space contract. While enroute, he learns that to win the promised fortune, he and nine other recruits face a brutal competition, putting their very humanity at risk.

“One of Us is Lying” by Karen M. McManus
When the creator of a high school gossip app mysteriously dies in front of four high-profile students, all four become suspects. It’s up to them to solve the case.

“A List of Cages” by Robin Roe
Adam, a high school senior, is an aide to the school psychologist. When the doctor asks him to track down the freshman who keeps dodging her, Adam discovers that it’s Julian, the foster brother he hasn’t seen in five years. Julian is now living with his abusive uncle. Though determined to help Julian, getting involved proves dangerous.

“Goodbye Days” by Jeff Zentner
Blamed on a simple text from Carver, a fatal crash kills his three best friends. He feels guilty, and a judge wants to open up a criminal investigation. The victims’ families ask to spend a “goodbye day” with Carver, to share their memories. Will this help them cope or bring Carver one step closer to a complete breakdown and possibly prison?

“Eliza and Her Monsters” by Francesca Zappia
Eliza is shy, weird and friendless. Online, she’s LadyConstellation, the creator of the wildly popular webcomic Monstrous Sea. She’s happiest in her online world until Wallace transfers to her school and begins drawing Eliza out of her shell. But when her secret is accidentally shared with the world, everything begins to fall apart.

“Far From the Tree” by Robin Benway
Grace is an only child adopted at birth. When she reunites with her biological younger sister and older brother, their family’s long-buried secrets and fears explode.

“A Short History of the Girl Next Door” by Jared Reck
Tabby is Matthew’s best friend. When she starts dating senior basketball star Liam, Matthew is sad that he lost Tabby to another guy, but fears losing their friendship more.

“Defy the Stars“ by Claudia Gray
Soldier Noemi and enemy robot Abel, forced by chance to work together, can end the fighting for good, but not without sacrifice.

“Dreamland Burning” by Jennifer Latham
Two voices from different centuries examine the same unsettling events. Rowan finds a skeleton on her family’s property and begins investigating the brutal, century-old murder. William, a teenager grappling with the racial firestorm leading up to the 1921 Tulsa race riot, reveals clues to the mystery Rowan is trying to solve.

“Invictus” by Ryan Graudin
Son of a time traveler from 2354 AD and a gladiator in ancient Rome, Farway Gaius McCarthy was born outside of time. He longs to explore history, but settles for stealing ancient relics to sell on the black market. Meeting mysterious Eliot on the Titanic alters his path.

“Soldier Boy” by Keely Hutton
Abducted at age 14, Ricky is trained and forced to serve in the rebel army in Uganda’s decades-long civil war. Twenty years later, Ricky helps rehabilitate thousands of former child soldiers in Uganda through his organization Friends of Orphans.