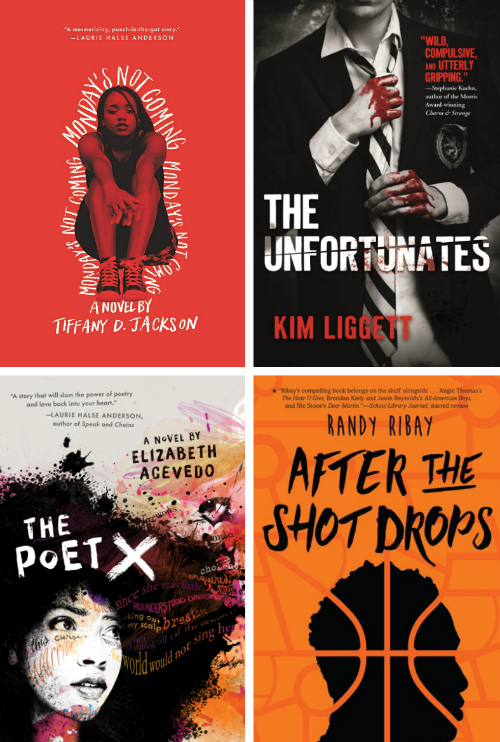 The Gateway Readers Award honors a young adult novel that is selected by Missouri high school students. To be eligible to vote, students must read at least three of the finalists. Voting will occur at participating schools early next March, so you can use the summer months to get crack-a-lackin’ on this list! The winner will be announced in April 2021.

“A Heart in a Body in the World” by Deb Caletti
Annabelle runs from Seattle to D.C., becoming a reluctant activist as people connect her journey to her recent trauma.

“After the Shot Drops” by Randy Ribay
Bunny takes a basketball scholarship to an elite private school to help his family, leaving behind his best friend in their tough Philadelphia neighborhood.

“Camp Valor” by Scott McEwen and Hof Williams
When enemies come for camp secrets, Wyatt and his friends have to put their training into practice to protect their country.

“Dread Nation” by Justina Ireland
When families go missing in Baltimore County, Jane McKeene finds herself in the middle of a conspiracy that has her fighting for her life against powerful enemies.

“Dry” by Neal Shusterman & Jarrod Shusterman
A California drought escalates to catastrophic proportions, turning Alyssa’s quiet street into a warzone, and she is forced to make impossible choices if she and her brother are to survive.

“Flight Season” by Marie Marquardt
College student Vivi, nursing student TJ and heart patient Angel find their lives intersecting one summer at the hospital. It could change their lives forever.

“Hey, Kiddo” by Jarrett Krosoczka
Jarrett’s mom is an addict. His father is a mystery. Jarrett lives with his grandparents — two people who had thought they were through with raising children until Jarrett came along.

“Little White Lies” by Jennifer Lynn Barnes
Eighteen-year-old Sawyer accepts her estranged grandmother’s bribe to live with her for a year, participate in the debutante season and ball and maybe meet her father.

“Monday’s Not Coming” by Tiffany Jackson
Monday Charles is missing, and Claudia seems to be the one person who notices. How can a teenage girl just vanish?

“Neanderthal Opens The Door To The Universe” by Preston Norton
Cliff ‘Neanderthal’ Hubbard has nobody at school, and life at home has gone from bad to worse. Then quarterback Aaron Zimmerman returns after a near-death experience: he saw God, who gave him a list of things to do and there’s only one person who can help.

“The Book Of Essie” by Meghan MacLean Weir
Essie is the 17-year-old daughter of an evangelical preacher, star of the family’s hit reality show, and has a secret pregnancy that threatens to blow their entire world apart.

“The Cruel Prince” by Holly Black
When Jude’s parents were murdered, she and her two sisters were stolen away to live in the treacherous High Court of Faerie. Ten years later, Jude wants to belong there, despite her mortality.

“The Poet X” by Elizabeth Acevedo
Xiomara Batista feels unheard and unable to hide in her Harlem neighborhood. She pours all her frustration and passion onto the pages of a leather notebook.

“The Unfortunates” by Kim Liggett
After Grant Tavish is involved in a fatal accident, he wants to face the consequences of his actions. Before he can act, a cave system collapse, trapping him and four other teenagers miles below the surface, where they soon discover they aren’t alone.