The Gateway Readers Award honors a young adult novel that is selected by Missouri high school students. To be eligible to vote, students must read at least three of the finalists. Voting will occur at participating schools early next March, so you can use the summer months to get a head start on this list! The winner will be announced in April 2022. 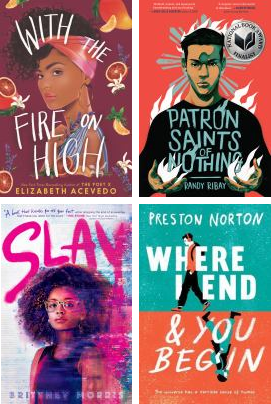 “With the Fire on High” by Elizabeth Acevedo
As both a senior in high school and a mother, Emoni must balance her schoolwork and family with her culinary aspirations.

“Internment” by Samira Ahmed
Muslim citizens, including Layla and her parents, are forced into internment camps. Layla, with the help of fellow internees and an unlikely alliance with a guard, leads a resistance movement.

“The Lovely and the Lost” by Jennifer Lynn Barnes
When a little girl is lost in a park, a family of search-and-rescue professionals reunites and generations of secrets are uncovered.

“I Know You Remember” by Jennifer Donaldson
After moving back to Anchorage and discovering the mysterious disappearance of her best friend, high school senior Ruthie embarks on a search that reveals dark secrets.

“The Speed of Falling Objects” by Nancy Richardson Fischer
When Danny’s dad invites her to join him to film the next episode of his popular survivalist show, Danny jumps at the chance to prove she’s not the disappointment he left behind.

“Ordinary Hazards” by Nikki Grimes
Growing up with a mother suffering from paranoid schizophrenia and a mostly absent father, Nikki Grimes found herself terrorized by babysitters and shunted from foster family to foster family.

“The Grace Year” by Kim Liggett
At the age of 16, Tierney James and the other girls in her society must endure a dangerous year in the wild, struggling to survive, before they can return home to marry or perform menial labor.

“Heroine” by Mindy McGinnis
When a car crash sidelines Mickey just before softball season, she has to find a way to keep her spot as the catcher for the team.

“Fireborne” by Rosaria Munda
Annie and Lee were just children when a brutal revolution changed their world. Now they are both rising stars and rivals in the new Regime.

“Where I End & You Begin” by Preston Norton
As a punishment, Ezra, his crush Imogen, his best friend and Imogen’s best friend Wynonna must all perform in the school play. Just before the first rehearsal starts, Ezra and Wynonna wake up in each other’s bodies!

“The Field Guide to the North American Teenager” by Ben Philippe
As the new kid, Norris finds himself cataloging everyone he meets: the Cheerleaders, the Jocks and the Loners. But those labels soon become actual people.

“Patron Saints of Nothing” by Randy Ribay
Jay Reguero learns that his cousin, and former best friend, was murdered as part of President Duterte’s war on drugs. Jay travels to the Philippines, hoping to uncover more about the murder, and is forced to face a larger truth.

“Field Notes on Love” by Jennifer E. Smith
Two teens, Hugo and Mae, are strangers until they share a cross-country train trip that teaches them about love, each other and the futures they can build for themselves.