“Brave, Not Perfect” is about empowering women to just be brave enough to try. It talks about how women are raised to believe in order to try something, they must be perfect at it. This isn’t the case! The author gives many motivating and heartfelt examples of how she or others have tried and failed or tried and succeeded, but the most important thing was that they tried. I think it is absolutely true that we are not taught that failure is okay. We are taught to be perfect and anything short is detrimental; the judgement from other women for not being perfect (or even their version of perfect) is astronomical. I can very much relate to what she is saying. In a society where everyone wants to prove everyone wrong, I feel stupid when people correct me, and it shouldn’t be like that. I think it is important what she is doing: telling women it is okay to apply for jobs you don’t 100% qualify for, or to learn about coding, or to fail. The important thing is to be brave, not perfect.

You might want to pick this book up if: You need a boost to help you jump-start that thing you’ve been too nervous to try.

“Terra Nullius” is one of the best books I’ve read on the topic of colonization. Realistic multiple perspectives? Check. Accessible, concrete language? Check. Timelessness? Check. Interesting, original plot line? Check. Written by someone with skin in the game, not just a research project? Check. One of the things I most appreciated about this book was it avoided the simple “cry for the poor victims” or “rage against the oppressor” or “bear ALL the guilt” approaches — it addressed all of those things, but the aftertaste of this book is acknowledgment of the problems and HOPE for finding improvements now.

You might want to pick this book up if: You can’t decide if you want to feel things or you want a fast-paced story–  have both! 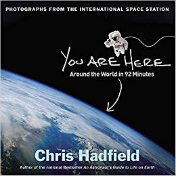 I grabbed “You Are Here” spur of the moment off a recommendations shelf at the library, and every time we opened it, the whole family, from age 45 down to age 7, were mesmerized. Every page or two I said, “Wow.” And then again, “Wow.”

Chris Hadfield took photos from the International Space Station, but not just big visions of a grand earth. He zoomed in to small(ish) geographical features and applied whimsy and imagination to what he saw, creating shapes out of them the way we do with clouds.

It’s a picture book accessible to all ages and a book I may just have to buy for my coffee table (assuming I ever have one again!).

You might want to pick this book up if: You’re fascinated by photography and space.

“Little Women” was a favorite book during my girlhood. I’m happy to find that it’s still a favorite book now! So well-written, so filled with valuable lessons of life, so full of hope and goodness! As a girl, I enjoyed reading about the games they played — giving plays, P.C. and P.O., Camp Laurence, Castles in the Air and Amy’s will. Upon re-reading them, I find them still every bit as enjoyable! And this time around I appreciated, more than when I was young, the life lessons learned by the sisters — Meg’s Vanity Fair, Jo’s Apollyon, Amy’s lime drop anguish and her later failed attempt to host a stylish luncheon, Meg’s ups and downs after her marriage. I also loved some of the vignettes on interactions between the characters — Beth going over to Mr. Lauren’s to thank him for the new piano, Laurie following Jo on her way to submit her manuscript, Laurie’s reaction after Jo refused him, Beth confiding to Jo at the seashore about her terminal illness, Meg’s wedding in which she chose not to follow traditional customs, Marmee’s heart-to-heart talks with Jo, and the March family giving their Christmas dinner to a poor family they knew. After reading Louisa May Alcott’s journal, I can tell a lot of these content came from real life experiences of her and immediate family, which makes me like the stories even more. Love, love, love the book. Will probably read it again in another couple of years.

You might want to pick this book up if: You want to read good, heart-warming historical fiction that gives a reader a sense of hope.

If you, like me, have been scared off by the hype around “Where the Crawdads Sing,” stop running — it totally lives up to its reputation! The story follows Kya, a woman living in the North Carolina swamps, both as a young girl growing up alone and as a grown woman. An outcast from her community, Kya is almost completely isolated. When the town playboy turns up dead and his past with Kya is revealed, she has to try and break through both the town’s distrust of her and her own defenses. Part romance, part murder mystery, and part coming of age, this book always has something to keep you turning the pages. Owens’ writing is atmospheric and enchanting, and the love Kya shows for her marsh is almost enough to make me want to brave the mosquitoes and see it myself.

You might want to pick this book up if: You love suspense, stories about broken but strong women, and Southern accents.

Rinker Buck purchased a team of three mules and a wagon to travel from Missouri to Oregon with his brother … in 2011. While traversing dangerous terrain, dodging interstates and chasing mules in slippers, Rinker brings the early Oregon trail pioneer’s stories to life in the book “The Oregon Trail” by describing his own modern challenges, and then comparing them to the challenges that the pioneers faced. Woven throughout the book are his memories of his father, giving the book a personal touch I was not expecting. While much of the book is serious, humor is sprinkled throughout, making it an entertaining read.

You might want to pick this book up if: you enjoy American history, travel, or enjoy reading about unusual adventures.

The “Paper Girls” comic series begins with four 12-year-old girls delivering their paper routes in 1988. What follows includes a trip to 2016 to encounter their (gasp) 40-year-old futures. Much time travel and monster action follows, with plenty of inside jokes for those of us who were around in 1988 and remember some of the significant events and changes since then that might be hard to understand if we just arrived from 1988. The colors and artwork are vivid, the characters are funny and lovable, and the story is fast-paced and surprising. This relatively short run comic ended July 2019 — check them all out at once because you won’t want to wait to see what happens in the next one! Also, it was recently picked up to be an Amazon show, and you know you’ll want to read the books before you see the show!

“Neverwhere” is an early Neil Gaiman novel that looks into the depths of London — both in terms of the existential crisis of a young urban professional and what happens when said yuppie discovers there’s a whole world below the London Underground. What follows is a venture-quest full of unexpected characters and situations that are simultaneously completely impossible and totally believable. There are shadings of Terry Pratchett and Piers Anthony, a touch of Lovecraft, and a fair helping of Gaiman’s ability to re-imagine familiar folklore and mythology.

I listened to the audio book and Neil Gaiman’s voicing skills make the story come to life.

You might want to pick this book up if: You ever wondered if the ragged guy talking to himself in the subway station was actually perfectly sane.

I found “Never Too Busy to Cure Clutter” to be full of helpful, practical, non-judgmental information, presented in a fun style, and not so prescriptive or rigid that it made me chafe at the idea of it. And the author definitely understands that people are busy and not (probably) interested in taking tons of time to get rid of clutter and organize.

Each part of the house has its own section, and suggestions for things you can do if you have 30 seconds, one minute, five minutes, or 15 minutes, plus longer weekend project ideas. There are a few fun quizzes throughout, to determine things like your suggested closet organizing style (mine is “visual,” even though my actual closet is closer to the “super-organized” description). Though I don’t agree with everything (I’m NOT getting rid of my physical books/media/photo albums in favor of digital versions, though I may weed them), there are a LOT of things in this book I’m going to try. In the intro, the author says to take what you like and leave what you don’t, so I feel like I’m totally in line with that!

You might want to pick this book up if: You could use some fun tips on keeping your house clean and uncluttered in whatever kind of time you have.

“Stay Sexy and Don’t Get Murdered” is a dual-memoir from the hosts of popular podcast “My Favorite Murder.” They tell stories that have been touched on in episodes of the podcast, as well as other topics that have never been discussed. Each chapter is under a certain theme or inside joke often referenced in the podcast, such as “Stay Out of the Forest” or “Sweet Baby Angel,” and it was interesting to see how they incorporated stories from their pasts to jokes on the show. I loved it because it was like hearing words of wisdom from two older friends who swear a lot and have experienced very relatable lives, all while through a lens of humor.

You might want to pick this book up if: You love true crime and comedy and swearing.