The first time I listened to Snail Mail’s 2018 album “Lush” was on a train to Chicago, newly heartbroken and on my way to see a dear friend. The sun was rising on a frigid November morning. I felt relieved to be tucked away, going somewhere.

I curled up against the window and hit “shuffle.” Track three, “Speaking Terms,” greeted me with a moody lead guitar and swept me up in its driving rhythm.

I was startled by Lindsey Jordan’s voice, youthful and piercing yet deeply world-weary.

“Leave things on speaking terms / And I’ll see you around,” she sang. I closed my eyes.

Some albums win you over with their expansive emotional and musical range. For me, “Lush” was not one of those albums.

Rather, listening to “Lush” feels like tuning into a singular, excruciating emotional frequency; like walking into a waterfall and letting the roaring wall of feeling crash through you. Heartbreak. Youth. Shame. And still, love. Over and over again, until your heart emerges a shiny pebble. END_OF_DOCUMENT_TOKEN_TO_BE_REPLACED

Why I Checked It Out: I’m a sucker for a good thriller and I’d seen good reviews so I had no issue putting “Sadie” on my to-be-read list. It moved to the top of the list once I learned it had an unusual storytelling format. Some of the chapters are from the perspective of the protagonist, Sadie. But the other half are a true-crime podcast. That grabbed me since I’m pretty much a true-crime junkie. But then I learned that not only was the book in this format, but the audiobook went all out and actually created those chapters in podcast format with multiple narrators and sound effects. I knew this was one I would have to listen to. END_OF_DOCUMENT_TOKEN_TO_BE_REPLACED

“This is what it means to be a fan: curious, open, desiring for connection, to feel like art has chosen you, claimed you as its witness.” – Carrie Brownstein, “Hunger Makes Me a Modern Girl”

Prior to reading this book, I would not have necessarily considered myself a Carrie Brownstein “fan.” Like many my age, I knew Brownstein from Portlandia, her charmingly absurd sketch comedy show with Fred Armisen. My apologies to Sleater-Kinney fans; I acknowledge that this is sacrilege. In my defense, the band’s pre-hiatus discography released concurrently with my journey from infancy through elementary school, so I had barely graduated from Barney to Britney Spears. I downloaded the audiobook on a whim and it fully converted me into a fan as Brownstein defines the term.

This is not a sex, drugs, rock and roll type memoir. It begins with Brownstein’s youth in the Pacific Northwest, where her intense love of music and her attention-seeking tendencies lead to the formation of iconic punk band Sleater-Kinney. The format of the book then shifts to each chapter title corresponding to a Sleater-Kinney album, detailing each album’s creation, release and subsequent tour. Brownstein conveys tour life as grimy, unglamourous and exhausting. She does find comfort in the books she reads on the road, which clearly cultivated her talent as a writer. Content aside, “Hunger Makes Me a Modern Girl” is incredibly well-written. The rich vocabulary and shrewd sense of timing make this a visceral and immersive read. Brownstein’s account of her own instantaneous breakdown that led to a 10 year hiatus for Sleater-Kinney is completely gut-wrenching. END_OF_DOCUMENT_TOKEN_TO_BE_REPLACED Book I Read: “The Silent Companions” by Laura Purcell

Why I Checked It Out: I won’t lie — that beautiful cover with its gold inlay-enhanced imagery was the first thing that made me consider picking up this book. The eye staring out of the keyhole is just super creepy. I, of course, immediately had to open the cover and see who it was that was staring back at me. And then I figured out it was a Gothic-style horror, complete with haunted manor house, secretive servants and a protagonist with a secret from her past that has come back to haunt her. So, yeah, it had me hooked pretty quickly. END_OF_DOCUMENT_TOKEN_TO_BE_REPLACED

Editor’s note: Several of our regular blog writers have looked back at the books they read in 2017, and they’ve each written their own “Year in Review.” This is the last installment. Enjoy!

2016 was tough; 2017 could have been better than 2016, but wasn’t. So, this year I re-read books for the comfort of knowing I’d spend hours reading well. I returned to Hanya Yanahihara’s “A Little Life” for the third time, and re-read, slowly, Maggie Nelson’s “The Argonauts,” “The Red Parts,” “Jane: A Murder,” “Bluets” and “The Art of Cruelty.” For their elegant sentences, challenging ideas, and strobe-like illumination, these books are treasures to me. The character of Jude, in “A Little Life,” reminded me that healing isn’t for all—that some people don’t change, that fate, in all its dogmatic baggage, binds, stills, abides, sustains. This novel again taught me also, among many other things, that happiness is plush, a privilege, not for everyone. I coupled this thought with Nelson’s insistence on queer world-making and queer family-making

in “The Argonauts.” Even if happiness dissembles and eludes, there is pleasure. END_OF_DOCUMENT_TOKEN_TO_BE_REPLACED

Editor’s note: Several of our regular blog writers have looked back at the books they read in 2017, and they’ve each written their own “Year in Review.” This is the first installment. Enjoy!

One of my favorite things to do in December is reflect on the books I’ve read over the past year. Reading is a bit like traveling, and it’s really nice remembering all the places I’ve been able to visit over the past year. In my “real life” I was blessed with trips to Hawaii and Colorado this year, but thanks to the books I’ve picked up this year, I’ve been able to travel to many other places and times. Here are some of the highlights:

I journeyed to Australia in the twisty domestic thriller “Big Little Lies” by Liane Moriarty. This book recently inspired an award-winning miniseries on HBO, but the book is even better, offering a darkly humorous and suspenseful tale of how friendships and lies can lead to murder. END_OF_DOCUMENT_TOKEN_TO_BE_REPLACED

The year is almost over, and the staff here at the library want to share their favorite book of 2017 with you! I hope you enjoyed the first installment. Here are the rest of the best books read in 2017 by your DBRL staff:

“Fast-paced and suspenseful, this novel is page-turner from the get-go. While categorized in the sci-fi genre, it invokes universal questions regarding the choices you make, the paths-not-traveled and what you would endure for those you love.”
~Dana S.

“I laughed, cried, and was forced to bear with some very ugly personal truths. ‘Small Great Things’ reads as a fantastic work of fiction, but also as a primer for fundamental conversations about race, privilege, inequality and basic human experiences. This book will grab you by the shoulders and shake you to the core.”
~Mitch C. END_OF_DOCUMENT_TOKEN_TO_BE_REPLACED

The year is almost over, and the staff here at the library want to share their favorite book of 2017 with you! These books might not have been published this year, but they all were enjoyed during it. Without further ado, here’s the first batch of the best books read in 2017 by your DBRL staff:

”Ove is a grumpy neighbor who still has a warm heart. ‘A Man called Ove’ will make you laugh and cry. It reminds us how caught up we can get in our daily routines, and how unwilling we are to change; but sometimes, someone comes along and change is okay.”
~Sheryl Bucklew

“At first I thought it was going to be depressing, but it quickly took a comedic and touching turn as Ove learns to keep on living without his wife.”
~Mitzi END_OF_DOCUMENT_TOKEN_TO_BE_REPLACED

The Arabic name for Jerusalem is Al-Quds, and the Arabic name for Temple Mount is Haram al-Sharif. (I could have begun, “The Hebrew name for….”) The double-naming underscores the confusion and complexity that is Israel-Palestine.

The so-called Israeli-Palestinian conflict confounds policymakers, diplomats, government officials, citizens. The situation, if this is the appropriate word, resists simplicity because, to put this simply, historical consensus—what happened and who is at fault—is impossible.

But what, if not their land, do Israelis and Palestinians share? 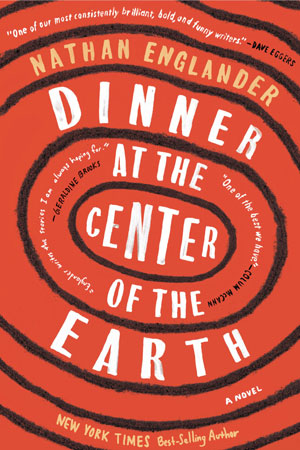 Heartbroken by the conflict, Nathan Englander investigates the failure of solution in his second novel, “Dinner at the Center of the Earth.” Unlike his previous short story collections (“For the Relief of Unbearable Urges” and “What We Talk About When We Talk About Anne Frank”) and novel (“The Ministry of Special Cases”), Englander’s latest work, not unlike his subject, defies categorization or genre. A plot-driven political and spy thriller, a love story, a farce—this novel is an admirable literary combination but fails to compel. The humor falls flat: what’s the joke and where’s the punchline, I thought. The dialogue, despite a few enticing passages, is stilted, wooden, even cliché. The discontinuous timeline and various threads Englander attempts to interweave are strained, rushed. The fits and starts, so to speak, never resolve. END_OF_DOCUMENT_TOKEN_TO_BE_REPLACED

Tragedies scatter about our lives, usually. If a decade or more separates one loss — a job, a parent, a home, a pet — from another, is what’s lost a tragedy?

For others, losses accumulate, completely warping their understanding of the world. In her articulate tragicomic memoir, “The Rules Do Not Apply,” Ariel Levy recounts the dissolution of her marriage, her miscarriage and her move from what she thought her permanent home — all lost over three months. Reading this challenges one’s sense or definition of tragedy. END_OF_DOCUMENT_TOKEN_TO_BE_REPLACED