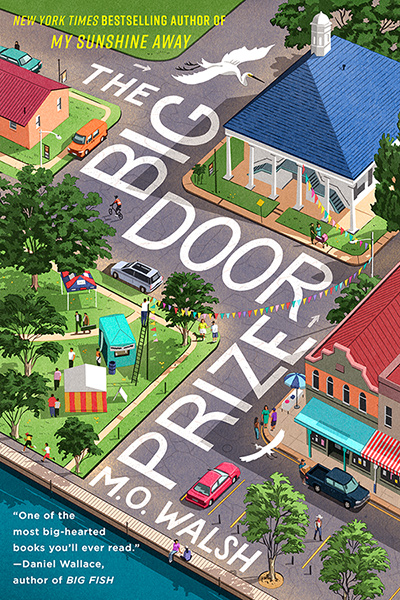 By a margin of 21 votes, the community voted to read “The Big Door Prize” by M.O. Walsh for this year’s One Read program. The community is given the summer to read the book in preparation for related events, including an author talk, in September.

“This year’s selection opens up some topics we haven’t explored in a One Read book before, like gratitude, teen mental health and identifying one’s personal potential,” said One Read co-chair Lauren Williams.

M.O. Walsh addresses serious topics with a light hand in this offbeat and charming novel about small-town life, relationships and the power of dreams. An unassuming booth shows up at a Deerfield, Louisiana grocery store, promising to reveal your true life potential for a mere two dollars and a swab of DNA from your cheek. Suddenly, store owners, nurses and teachers are striving to be cowboys, magicians and athletes. The steady and quietly happy marriage of Douglas and Cherilyn Hubbard is disturbed by Cherilyn’s readout from the mysterious machine, which declares her true life calling to be “royalty.” Meanwhile, teenager Jacob tries to figure out who he is after the death of his twin brother, Toby. And Toby’s troubled ex-girlfriend, Trina, plots revenge.

M.O. Walsh was born and raised in Baton Rouge, Louisiana. His fiction and essays have appeared in the New York Times, The Guardian, The Paris Review, The Southern Review and many others. His first novel, “My Sunshine Away,” was a New York Times bestseller.

Last November, the library received 268 suggestions for what to read in 2022 and this April 691 people voted for their preferred title. The One Read reading panel, made up of community members from Boone and Callaway Counties and library staff, narrowed the list of suggested books to 10. After reading each book, the committee selected two titles for the public to vote on in April. The other title considered this year was the novel “Deacon King Kong” by James McBride.

As in past years, the Friends of the Columbia Public Library will fund the purchase of multiple copies of the One Read title for people to check out so anyone wanting to read it will be able to before September. It’s also available in large print, as an eBook and downloadable audiobook.

The community task force in Boone and Callaway Counties have met to begin planning a blend of in-person and online events for September. “This year, the author has agreed to come to Columbia for an in-person author talk. For the past two years, it’s been over Zoom due to the pandemic,” said Kirk Henley, DBRL Collection Development Manager and One Read co-chair.

The task force is also organizing both an art competition and a writing contest based on some aspect of the book. “We’re in the process of deciding on themes for both the art and writing contests,” said Kat Stone Underwood, DBRL librarian and One Read co-chair. “We look for meaningful quotes and themes in the One Read book that make compelling prompts for those wanting to participate.”

One Read, now in its twenty-first year, is a community-wide reading program coordinated by Daniel Boone Regional Library and co-sponsored by a task force of local businesses, agencies, academic institutions and other groups that encourages adults of all ages to read and discuss a single book. More information about submitted titles and related One Read topics can be found at oneread.dbrl.org.