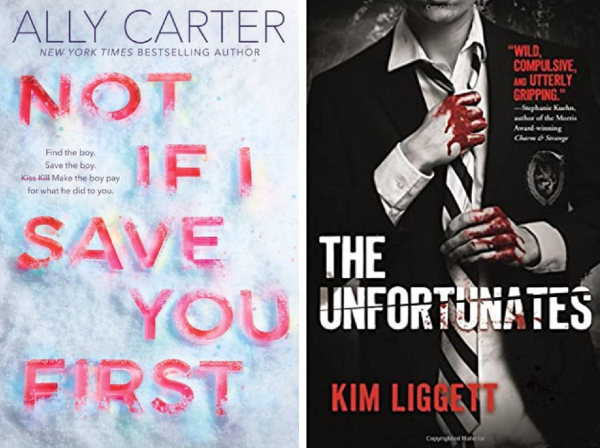 The winners for the Gateway and Truman Readers Awards have been announced! These awards honors the best-loved books among Missouri high school and junior high students. To be eligible to vote, students must read 3-4 of the finalists.  This year, hundreds of votes were cast by students in grades 6-12.

1st Place: “Not If I Save You First” by Ally Carter
Six years ago Maddie lived in Washington D.C. with her father, a Secret Service agent assigned to the President’s family, and her best friend was Logan, the President’s son; but after her father was wounded in an attempted kidnapping the two of them moved to a remote cabin in Alaska and Logan never replied to her letters. But now he has suddenly turned up on her doorstep she has to save him from the winter wilderness and the men who are pursuing him.

2nd Place: “Ghost Boys” by Jewell Parker Rhodes
After seventh-grader Jerome is shot by a white police officer, he observes the aftermath of his death and meets the ghosts of other fallen Black boys including historical figure Emmett Till.

3rd Place: “City of Ghosts” by Victoria Schwab
Ever since her near-fatal drowning, Cassidy has been able to pull back the “Veil” that separates the living from the dead and see ghosts. When the family travels to Scotland, Cass and her personal ghost companion, Jacob, are about to find out that a city of old ghosts can be a very dangerous place indeed.

1st Place: “The Unfortunates” by Kim Liggett
After Grant Tavish is involved in a fatal accident, he wants to face the consequences of his actions. Before he can act, a cave system collapse, trapping him and four other teenagers miles below the surface, where they soon discover they aren’t alone.

2nd Place: “The Cruel Prince” by Holly Black
When Jude’s parents were murdered, she and her two sisters were stolen away to live in the treacherous High Court of Faerie. Ten years later, Jude wants to belong there, despite her mortality.

3rd Place: “Dry” by Neal Shusterman & Jarrod Shusterman
A California drought escalates to catastrophic proportions, turning Alyssa’s quiet street into a warzone, and she is forced to make impossible choices if she and her brother are to survive.