The Truman Readers Award honors a book that is selected by Missouri junior high students. To be eligible to vote, students must read at least four of the finalists. Voting will occur at participating schools early next spring. While the winner won’t be announced until April 2022, this is a great list of summer reads for students in grades sixth through eighth. 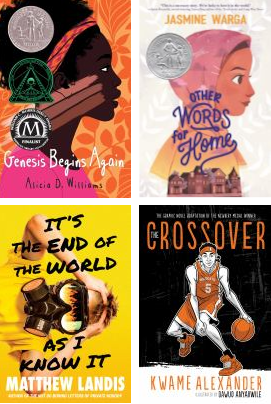 “The Line Tender” by Kate Allen
Lucy Everhart is the daughter of a rescue-diver father; her marine biologist mother died suddenly when Lucy was only seven. She is spending the summer before eighth grade with her best friend, Fred, when locals and experts alike are shocked by a dead great white shark washing up in their small coastal town.

“Verify” by Joelle Charbonneau
When Meri Beckley looks at the peaceful Chicago streets, she feels pride in the era of unprecedented hope and prosperity. But when her mother is killed, Meri suddenly has questions that no one else seems to be asking.

“The Crossover (Graphic Novel)” by Kwame Alexander, illustrated by Dawud Anyabwile
Twin brothers Josh and Jordan, sons of a basketball legend, rule the court, especially when they cooperate. But when the two find themselves growing further apart, as hormones increase and a girl enters the picture, life on and off the court falls into chaos.

“The Remarkable Journey of Coyote Sunrise” by Dan Gemeinhart
For the past five years, 12-year-old Coyote Sunrise and her father, Rodeo, have traveled all over the U.S. Once upon a time, they lived in Washington state, but when her mother and two sisters died in an automobile accident her father, changed their names and took off, determined to put painful memories behind them.

“The Unteachables” by Gordon Korman
Teacher Zachary Kermit has been haunted by scandal for the last 27 years . So when he is assigned a class of students with behavior issues and learning difficulties, he is unfazed, only a year away from retirement. But when Mr. Kermit unexpectedly stands up for one of his students, the kids notice.

“It’s the End of the World as I Know It” by Matthew Landis
Ever since his mother was killed in the line of duty in Iraq, Derrick has been convinced that the apocalypse is coming. When his next-door neighbor, Misty, reappears after a long bout with a rare kidney disease, confusion settles in like a low-grade fever.

“The Bone Houses” by Emily Lloyd-Jones
Ever since the dead have started coming back to life, gravedigger Ryn has been out of work. Desperate to clear her family’s debts to a greedy landlord, Ryn connects with Ellis, a lost mapmaker, who will pay her to guide him into the mountains.

“Free Lunch” by Rex Ogle
Recounting his childhood experiences in sixth grade, Rex Ogle’s memoir chronicles the punishing consequences of poverty and violence on himself and his family.

“Right as Rain” by Lindsey Stoddard
Following the death of her brother, 10-year-old Rain and her family leave Vermont for New York City. Rain struggles to adjust to life in a big city, but eventually bonds with her new neighbor.

“Tiger Queen” by Annie Sullivan
Sixteen-year-old Princess Kateri’s desert kingdom is suffering from a drought, and the king is having to ration their water, which is also being stolen by a rebel gang. Kateri longs to help her people, but first she must fight through the arena and prove her right to rule.

“Other Words for Home” by Jasmine Warga
Sent to live with a relative in Cincinnati after civil war comes to Syria, Jude worries for the family members who were left behind as she adjusts to a new life.

“Genesis Begins Again” by Alicia D. Williams
Thirteen-year-old Genesis has a turbulent home life, and when her father moves their Black family to an upscale, mostly-white suburb, she has to find her footing in a new environment.