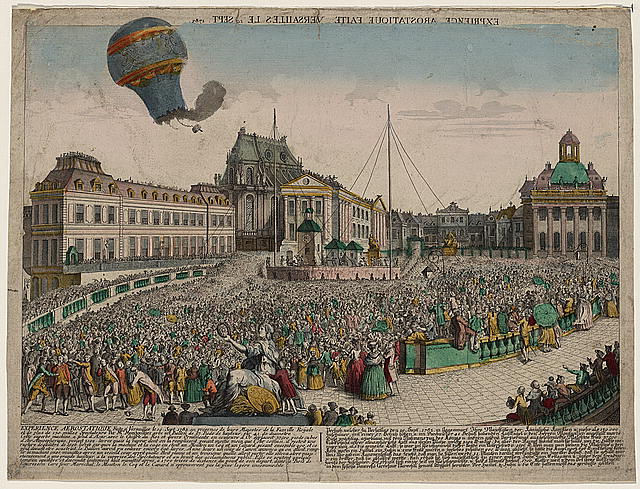 On December 17, 1903, the Wright brothers made their first successful airplane flight on a beach in Kitty Hawk, North Carolina. It lasted a mere 12 seconds and covered 120 feet. There would be three more flights that day, the longest totaling 59 seconds and covering 852 feet. But Wilbur and Orville Wright were certainly not the first humans to dream of flight, or even to attempt it. Wilbur Wright put it best:

“The desire to fly is an idea handed down to us by our ancestors who…looked enviously on the birds soaring freely through space…on the infinite highway of the air.”

Long before the Wright brothers had ever dreamed of a flying machine that would carry a person into the air, the first aeronauts had already left solid ground behind. In “The Balloonists” L.T.C. Rolt reveals the story of another pair of brothers who had their hearts set on flight. The Montgolfier brothers, Joseph-Michel and Jacques-Étienne, made history in 1783 with the first hot air balloon flight; others soon followed them into the skies. Rolt draws from journals and contemporary accounts to recount the lives and exploits of these early balloonists who paved the way for the Wright brothers.

Taking a different approach, William Hazelgrove makes the argument that the Wright brothers did not contribute equally to the development of their first plane in “Wright Brothers, Wrong Story.” He claims that Wilber was the true creative genius behind the project, acting as both inventor and pilot, while Orville merely provided the mechanical skills needed to realize Wilbur’s vision. Hazelgrove further suggests that Orville rewrote their own history after his brother’s early death, exaggerating his own role to place himself on equal footing with his brother.

Many daring pilots have made history in planes we would consider barely air-worthy today. Dan Hampton focuses on one such pilot in “The Flight.” Charles Lindbergh was only 25 years old when he attempted his transatlantic flight in pursuit of the Orteig Prize. Six men had already died chasing this prize, which promised $25,000 to the first pilot to fly nonstop from New York to Paris. A solo journey of 3,600 miles lay before Lindbergh, and his survival depended on his skill and his single-engine aircraft.  Early on May 20, 1927 he took off from Long Island. Thirty-three and a half hours later, he became an international celebrity when he touched down in Paris before a crowd of 150,000 spectators.

In the early days of aviation, the first official race women pilots were allowed to enter was the Women’s Air Derby, popularly known as the Powder Puff Derby. “Fly Girls” by Keith O’Brien looks at the lives of five remarkable women pilots of the 1920s and ‘30s and their fight for equality in the air. One of those pilots was Louise Thaden who, with Blanche Noyes, became the first woman to win the Bendix Trophy in 1936 — the first year women were allowed to race against men.

Aviation history was made again, spectacularly, in 1947, when World War II ace Captain Chuck Yeager risked his life to break the sound barrier. In “Chasing the Demon,” Dan Hampton tells the story behind America’s quest for speed and the classified military program that pushed the limits of human flight. Yeager made history and gained recognition with his supersonic flight, but Hampton reveals that a fellow pilot — civilian George Welch — actually beat Yeager to it.

By the mid-20th century, human flight had reached the point where there was only one place left to go: space. During the Cold War, pressure mounted to be the first nation to enter this final frontier. The ensuing space race is documented by Jim Donovan in “Shoot for the Moon.” From Sputnik to Apollo 11, Donovan follows the successes and failures of space flight and its pioneering astronauts, culminating on July 20, 1969 with Neil Armstrong’s first steps on the moon and his famous quote: “That’s one small step for man, one giant leap for mankind.”

The Smithsonian, home of the National Air and Space Museum, provides a beautiful visual history of aviation with the “Smithsonian Atlas of World Aviation” by Dana Bell, which contains hundreds of historic maps, navigation charts and photographs. “Flight” by R.G. Grant details advances in aviation from the earliest pioneers of flight through modern airplanes and spacecraft. And the “Smithsonian Atlas of Space Exploration” by Roger D. Launius focuses entirely on space, from the dawning of the space age to our flights to the stars, and offers a glimpse into the future of space exploration.

Image Credit: The Dream of Flight via loc.gov