The days are shorter, the air is colder and holiday stress threatens to overwhelm holiday cheer. Distractions that provoke laughter, or at least inward chuckles, are in order. A satirical novel (or two), could be just what you need to divert your attention from your heating bill and anything else that ails you. “Infinite Jest” by David Foster Wallace (Little, Brown and Company, 1996) is encyclopedic in size and scope, and satire features heavily among the hundreds of ideas battling for attention in its thousand-plus pages. Years are no longer represented numerically, but by whichever corporation has secured their naming rights. Much of the novel’s events take place during the “Year of the Depend Adult Undergarment.” And while “Infinite Jest” may not have forecasted the reach of the internet, it did take time to satirize the pull of entertainments. Specifically via the cartridge known in the novel as “The Entertainment,” a video so fatally compelling that its viewers become unable to do anything but repeatedly view it. It can be a challenging book, but it’s also bursting with pleasures and heart. If you’re looking for something less challenging, George Saunders writes short stories and is one of our greatest writers. He’s published four brilliant collections of short stories, “CivilWarLand in Bad Decline (Random House, 1996), “Pastoralia” (Riverhead Books, 2000), “In Persuasion Nation” (Riverhead Books, 2006) and “Tenth of December” (Random House, 2013). Among the targets Saunders satirizes are consumerism, television and amusement parks. While Saunders is willing and able to poke fun at anything, he, like the sometimes misunderstood Wallace, has a huge heart, and his work is built on a foundation of empathy and love for people, even when they may not deserve it. Gary Shteyngart’s “Super Sad True Love Story” (Random House, 2010) springs from a world where everyone is constantly immersed in their electronic devices. People primarily use these devices to rate each other’s appearance via an application whose name is too lurid to be printed here. Good citizens also use these devices to shop. Those that don’t buy lots of things are viewed as burdens to society. Books are obsolete. The rich are close to being able to buy a breakthrough that will allow them to live forever. While we are probably a least a few years from mirroring this reality, reading this novel should help you brace yourself. Perhaps you’re more in the mood for satire of the early 19th century. If so, try the work of Jane Austen. Widely considered an author of humorous and sentimental novels, Austen’s work has more bite than it’s often given credit for. Austen lampooned hypocrisy and sentimentalism. If you haven’t read Austen, and view “Sense and Sensibility” (1811) and “Pride and Prejudice” (1813) as nothing more than cute comedies of manners, it’s time to give her work a serious read. 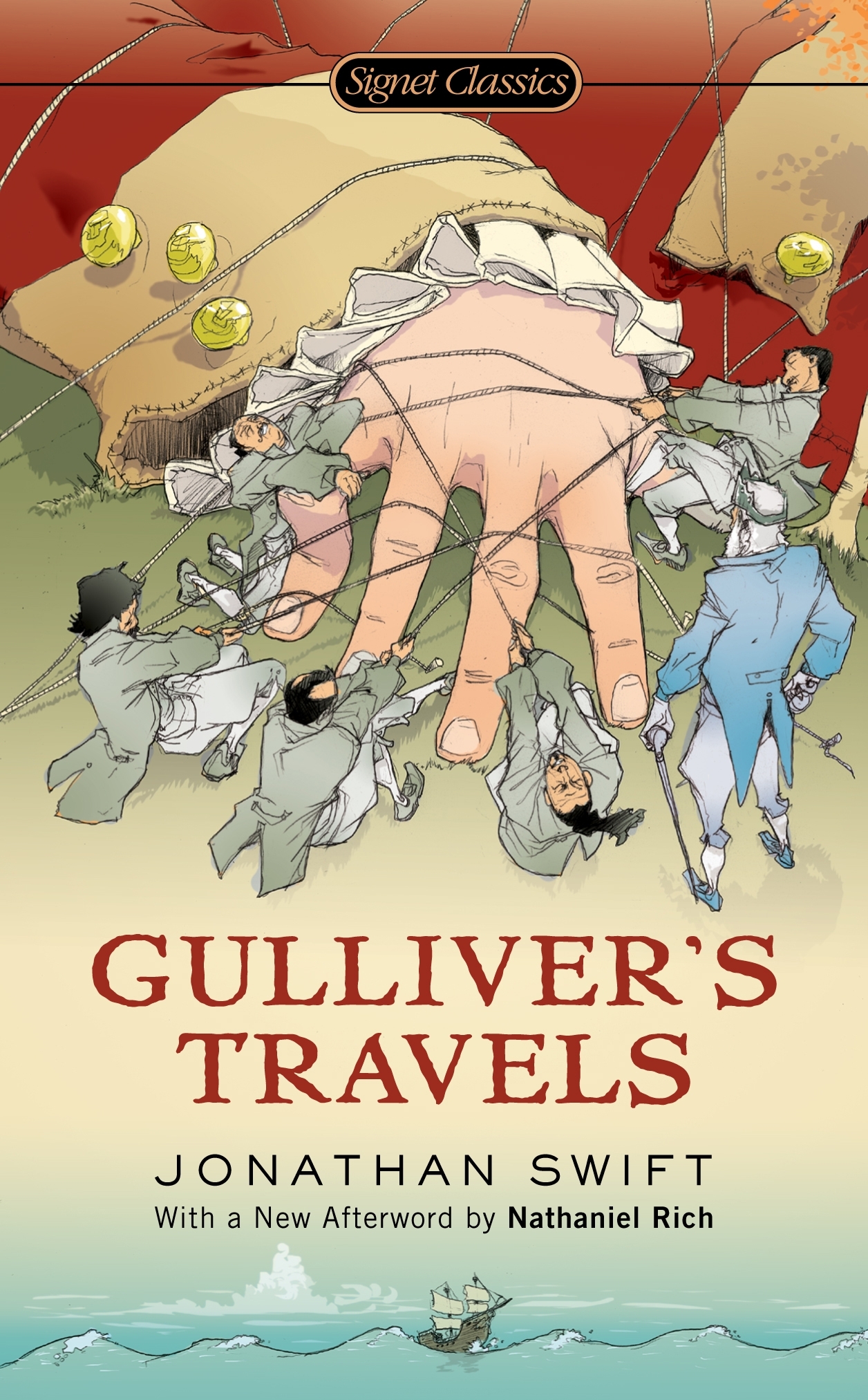 If you’d prefer an escape from the last couple centuries, the work of Jonathan Swift may be the remedy you seek. A tale of one man’s travels to lands of super-tiny people, super-huge people, horse people and immortals, “Gulliver’s Travels” (1726) is a satire of politics, science, philosophy, travel literature and people in general. And if you’re looking for a quick slice of satire, try his essay, “A Modest Proposal (1729).” Swift’s modest proposal is for the children of the poor to become a source of food, an idea that, while admittedly efficient, hopefully will never gain traction. Want something more contemporary? Try “The Nix” by Nathan Hill (Knopf, 2016). One of my favorite reading experiences in recent memory and a thorough exploration of what happens when an absentee mother throws rocks into a politician’s eyes, “The Nix” is a 600-page masterpiece that manages to consistently offer both comedy and heartbreak. Every scene has something to enjoy and admire, and the way it parcels out new questions just as it answers old ones will make it difficult to put down. It satirizes, among other things, politics, the media, college culture, literary culture, online gaming, social media and diet fads.

The works mentioned are all FREE to borrow from the Daniel Boone Regional Library, so you won’t have to choose between the warmth of your furnace and the warmth that comes from immersing yourself in the delights of great satire. Which is good, because no one wants to deal with frozen pipes.