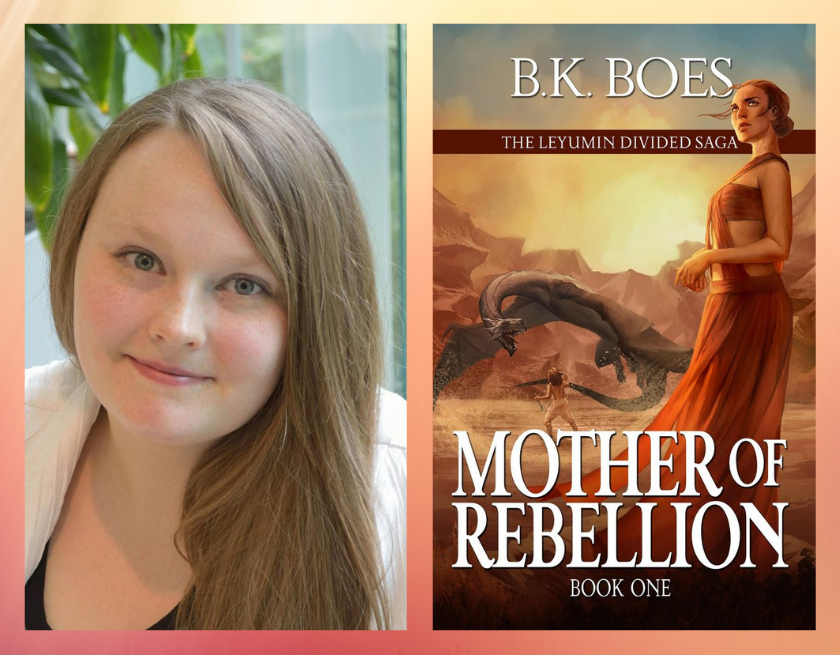 B.K. Boes is a Mid-Missouri author who recently came out with her debut book, “Mother of Rebellion.” The book is the first in her epic fantasy series, The Leyumin Divided Saga, and introduces us to the divided continent of Leyumin, where two nations vie for dominance — one through politics and manipulation, the other through brute force and self-proclaimed pure blood. You can find out more about the book on her website, or follow her through twitter, facebook, and her email newsletter. I emailed some interview questions to her, and she was kind enough to take time to write back some answers.

Daniel Boone Regional Library: You introduce five main point-of-view characters in this book. What’s the most challenging thing about writing a character introduction?

B.K. Boes: Each character has to be a real person to the reader. That means unique baggage, emotional responses, thought processes, belief systems… everything about them has to make sense with who they are at their core. Figuring out the core of a character isn’t actually the most challenging thing about the process, though. The most challenging thing is putting myself into the heads of people who have had different experiences than I’ve had and making that real. That can be hard, but it’s one of my favorite things about being an author, not because it makes the story better (it definitely does!) but because I think it makes me a more empathetic person.

DBRL: One of your jobs outside of writing is being a freelance editor. How has that impacted your writing?

Boes: I have to turn off my “editor brain” when I’m writing, otherwise I will NEVER get anything written! Now, I think understanding and studying the elements of story, of syntax, and of grammar does help me while I’m writing a first draft, but not as much as you’d think. I probably produce less errors than some authors on a first draft, but I still have to go over it multiple times and self-edit. I also still need editors besides myself! It’s so hard to see our own mistakes, especially when it comes to big picture things like cause and effect, foreshadowing, flow of story, etc. Actually, I think being a freelance editor has impacted my writing in an entirely different way than I would have suspected in the beginning. Working with my clients, brainstorming with them, learning about them, being part of their journeys — I really love that, and I am so humbled and grateful to see books I’ve edited do well. It’s really rewarding, and it gives me confidence in my own writing when that “imposter syndrome” sets in.

DBRL: In the background of your book cover is a creature you created called a Therbak, who are “cousins to the ancient and extinct dragon race.” Is there a story behind how you came up with these creatures?

Boes: That is actually a bit of a spoiler for the series. 😉 I have plans for the therbaks; they are wrapped up in some important plot points later on, and so are… dun, dun, dun…. their “cousins.”

Boes: I am re-reading The Stormlight Archive series by Brandon Sanderson. He’s my favorite author. I’m halfway through “Oathbringer,” and then I’ll move on to his newest installment, “Rhythm of War.”

Boes: Readers can purchase “Mother of Rebellion” wherever books are sold online. The ebook version is only available on Amazon, but the soft and hardcover versions are on several websites: Amazon, Barnes and Noble, Walmart, etc. If readers would like to purchase signed copies, they can contact me at contact@bkboes.com.