Skip to content
Home / Adults / Q&A With Kathleen Basi, Author of “A Song for the Road” 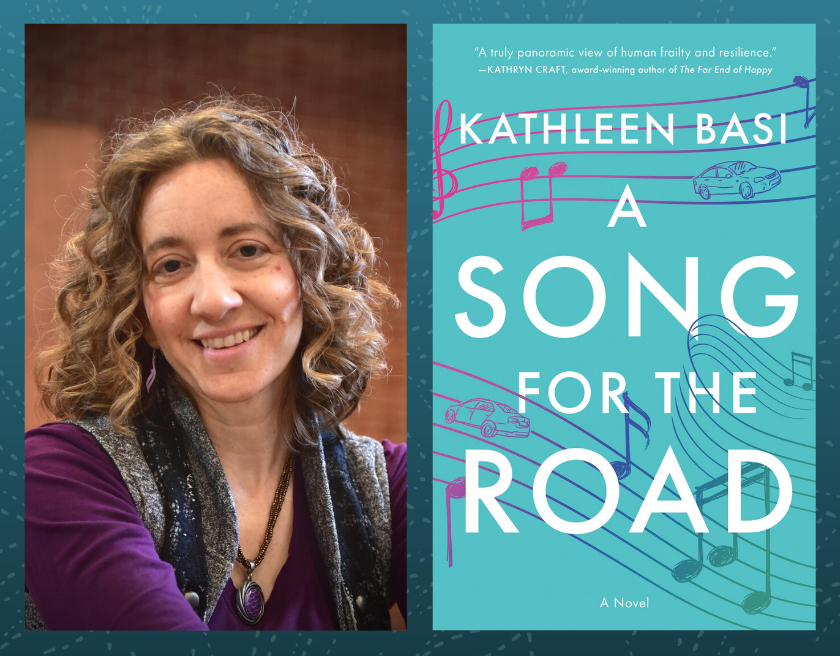 Kathleen Basi is a Columbia, MO author whose first novel is “A Song for the Road.” The book follows Miriam, who starts an unconventional road trip across the U.S. to grieve her family and face up to her choices. The story is a hopeful exploration of human frailty, resilience and the healing power of music. Basi is a classical flutist who’s composed a number of works for instrumental and choral ensembles. Her writing can be found in Apeiron Review, Chicken Soup for the Soul and NPR’s All Things Considered. She was kind enough to take the time to be interviewed via email.

Daniel Boone Regional Library: Does the main character’s musical tastes differ from your own in some way? Do you yourself have a favorite Taylor Swift song?

Kathleen Basi: Miriam and I both have pretty wide-ranging musical tastes. My degrees are both in flute, but during my years as a classical music student, I was also involved in contemporary church music at campus Newman Centers. So those two influences are braided together in me. (And now I Jazzercise, too, so I’m more in tune with the pop scene in my 40s than I was in my 20s!) In many areas I can separate my characters’ beliefs from my own, but where music is concerned, you can safely assume anything Miriam says is straight from me. Music is too personal to me to be otherwise!

As for Taylor Swift, I would say I am fascinated by her talent, and while the angsty songs of a few years ago are entertaining and really capture modern culture, I really appreciate her newer, more introspective music.

DBRL: You mentioned in another interview that you did road-trips with your grandparents while growing up. How did those road-trips influence the one in the story?

Basi: Mostly, I’d say they helped me know this actually is something you can do! I grew up in Moberly, and we’d pack the RV and drive to Washington state and then down the coast to Disneyland, then back via the Grand Canyon. That’s around 5,000 miles over 3 weeks.

The primary disadvantage to any trip that covers this much territory is that you only skim the surface of places. I was an adult before it occurred to me that — gasp — you might be able to hike in a national park.

But those childhood vacations provided an introduction to the amazing and fascinating diversity that makes up the U.S. As an adult, I love picking a place to visit and really exploring it in depth. My favorite memories are those where the local flavor is strongest. When I started planning Miriam’s road trip across America, the only thing I knew for sure was that I did NOT want her stopping at big, obvious landmarks (Times Square, Grand Canyon, etc.).

One of my favorite reader comments — and one I’m happy to say I’ve gotten quite a few times — is, “I had to keep stopping to go look up these places and see if they’re real! Now I want to visit them all!”

DBRL: The main character becomes more complex as the story unfolds. What was the most difficult thing in bringing the complexity of that character to life?

Basi: Ah, you’re touching on one of my pet topics: growth as a human being! Life is so busy and so full of distraction, it’s easy (and tempting) to go with the flow and end up stagnating. I believe we are all, at all times, either growing or regressing.

To me, growth — emotional, mental, and spiritual — is the essence of what it means to be human. I want to write books that help people to touch their own essential goodness and say, “I am not okay with stagnation. I want to be a better, healthier person tomorrow than I am today.”

So I knew where I wanted Miriam to end up, emotionally speaking. The hard part was creating a character who starts out as a hot mess, but is still someone readers can root for — and who could realistically reach the end point I wanted her to reach. I couldn’t have accomplished it without my incredible critique partners, my literary agents, and my editor at Alcove Press.

DBRL: From what I understand you went through several drafts of your manuscript. Can you give an example of something from one of those early drafts that you really liked, but still had to cut?

Basi: In my original vision, Miriam didn’t just go viral; she became an unwilling internet sensation. I had created some really fun online interactions that were placed at the end of each section of the book. But my editor pointed out that the social media subplot was a distraction, and she was right! Once I pulled all that out, the book took on a crystalline purity.

Basi: So many! I’d say the two standout books for me in 2021 have been Anisha Bhatia’s “The Rules of Arrangement” and a much older book, Sister Helen Prejean’s “Dead Man Walking.” Of everything I’ve read this year, these two have stuck with me most.

Basi: “A Song for the Road” is on the shelves at Skylark Bookshop and Barnes & Noble as well as all your online retailers. You can find a complete list of links at https://kathleenbasi.com/novels/.