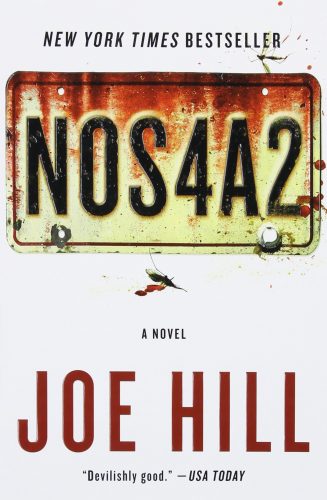 Book I Listened To: “NOS4A2” by Joe Hill

Why I Checked It Out: I’ve listened to a couple of other books by Hill and enjoyed his storytelling — a blend of fantasy and suspense, with a touch of horror. I also recently listened to his book “The Fireman,” which was also narrated by Kate Mulgrew and I fell in love with the way she reads a story (more on that later!).

What It’s About: Victoria “Vic” McQueen has a bike that can get her to the Shorter Way Bridge, which allows her to go to the places near or far that she is seeking. Similarly, Charles Manx has a 1938 Rolls Royce Wraith, which he uses to travel with the young children he’s kidnapped to a place called Christmasland. As a teenager, Vic stumbles across Manx, and unlike his previous victims she manages to escape his grasp and get him captured in the process.

Years later, Vic is divorced and working as a children’s author. She hasn’t ventured across the Shorter Way Bridge since the day she met Manx, but is regularly tormented by calls from the children Manx left in Christmasland. Around the same time, Manx, who has been languishing in a coma-like state, awakens and escapes. With the help of his hapless assistant, Bing, Manx decides to kidnap Vic’s son, Bruce “Wayne” Carmody. As Manx sets out to make his triumphant return to Christmasland, Vic finds herself drawn into the fight of her (and her son’s) life.

Why I Liked It: The story is chock-full of great characters. Vic is a compelling protagonist, but I really enjoyed the time I got to spend reading from the perspective of her ex-husband Lou, her son Wayne and Maggie, a librarian from Iowa with special psychic abilities, who Vic meets while out on one of her trips across the bridge. Even Charlie Manx, who excels at making witty insults (usually directed towards Bing), is rather amusing.

I also liked that the story was creepy, though not so scary that it kept me up at night. And, truthfully, the story itself was highly enriched by Kate Mulgrew’s top-notch narration. She’s created a unique voice for each character, and I honestly forgot it was one person reading the story. She brought them each fully to life and I genuinely mourned the loss of them when the audiobook was finished.

Who Will Like It: Readers who enjoy the work of  Hill’s father, Stephen King (of course!), Clive Barker, or Dan Simmons should give this one a try (and I highly recommend the audiobook version).

P.S. Regardless of whether you read the book or listen to the audiobook, make sure you read or listen until the very end, including the section on the typesetting. I promise it’ll be worth the time!