Sometimes you read a book that’s so good you want to recommend it every month, or at least quarterly. (But then you reflect on the swarms of rabid library blog readers and their hunger for fresh recommendations and the quiet disappointment they would feel should the same recommendation with slightly different wording and a varying quantity of references to the recommender’s fondness for snacks and monocles be what greets them as they enthusiastically “ask Jeeves” to retrieve the latest recommendation from “that book recommending gentleman,” and the recommender realizes, variety, even when what varies pales in comparison, can be useful, particularly in diets and reading material, and so you do the noble thing, and recommend a different author, at least until the author of that astounding novel you want to constantly recommend writes another book deserving of the recommender’s unhinged enthusiasm.) “A Naked Singularity” the first novel by Sergio de la Pava is such a book. Fortunately, his third novel, “Lost Empress,” is similarly magnificent, and so now I can recommend it and him again. 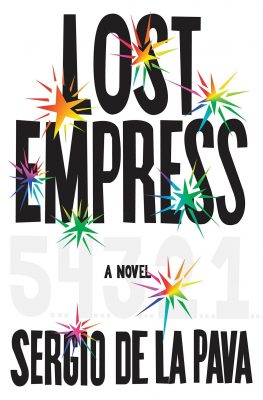 Devoted DBRL blog readers will no doubt remember de la Pava’s bio, and thus how massively deserving he is of his talents and success, but I will deliver a brief version: he is a public defender in New York, and he writes big, brilliant novels when he’s not publicly defending people for a slim fraction of what he could make if he was privately defending corporations. Given that he is a public defender, it’s logical that the justice system plays a large role in his fiction, and it’s even more logical that he would enumerate on the horrifying injustice that dominates our justice system. What might not seem logical is how his enumerations on injustice could be simultaneously compelling, hilarious and heartbreaking.

“Lost Empress,” in addition to detailing some of the sinister pratfalls of our justice system, takes on another target, one so powerful, profitable, and alluring that (in addition to receiving staggering sums of tax dollars so that its billionaire owners needn’t dip too far into their own vaults and offshore tax-free accounts in order to build venues more profitable than the highly profitable ones they’re replacing), men are perpetually obliterating their bodies and brains in order to get a sip of the money and adoration the public pours into its bottomless chalice. But it also relishes in the spectacle and strategy of football: a chunk of this 600+ page novel is given over to the rise of the Indoor Football League (its ascension made possible by NFL owners locking out their players because the players demanded a larger sip from the chalice, a chalice that owners yank away the second those players’ bodies have been damaged to an extent that precludes them from successfully engaging in the activities that both paid and damaged them). It’s no surprise the league flourishes, given the mascot duels that determine the opening possession and the weather wheel that determines the game’s weather. Of course, the NFL doesn’t like it, and this precipitates a portion of the thrilling climax of the novel.

The other largest portion involves an incarcerated fellow’s plot to steal a Dali painting from the jail that holds him, his attempts to exonerate himself in front of a grand jury for the crime that put him in prison, his relationship, forged in a mental institution, with a physicist who believes (correctly, given information that is privy to the reader) that he is in the wrong universe, and the terrifying lengths to which that physicist might go to correct the situation.

In addition to its focus on the the justice system and the NFL, the book also details the oeuvre of Joni Mitchell, the expansion of a brain tumor, briefly pays tribute to the genius needed to optimize the parking situation in a Manhattan parking garage, chronicles the rise and fall (and rise?) of a particularly talented 911 call transcriber, and a thousand other things.

I haven’t even mentioned the brilliant, powerful woman that revives the NFL, or the constant linguistic charms of the novel, or the superb reveal (delivered via an awesome transcript of his grand jury testimony) of what put the guy in prison, or the quietly heartbreaking familial scenarios that populate this novel, but I must save something to say for next month (or quarter) when I, as de la Pava deserves, recommend this book again.