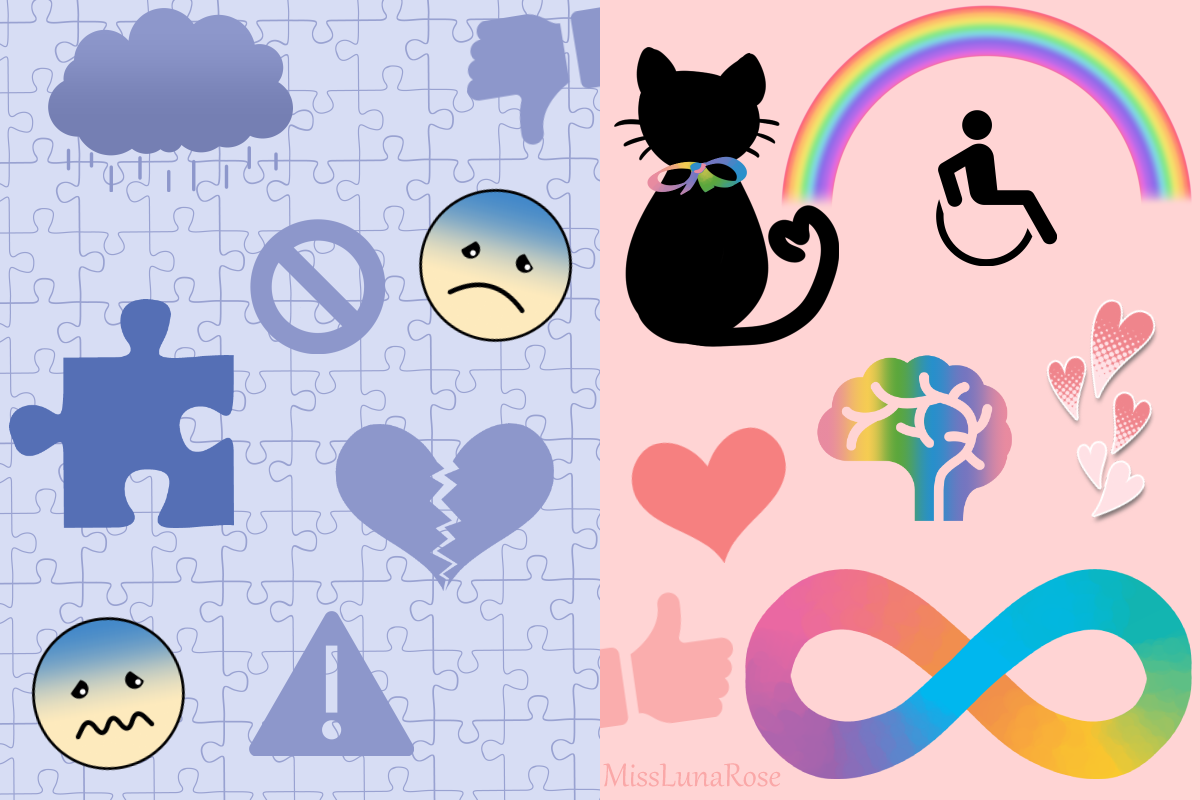 April is Autism Acceptance Month. Even though there are still a lot of stigmas and misconceptions surrounding autism, there is beginning to be a shift in perspective from autism as a disease to autism as a neural divergence, and from autism awareness to autism acceptance. According to the CDC, “Autism spectrum disorder (ASD) is a developmental disability that can cause significant social, communication and behavioral challenges. There is often nothing about how people with ASD look that sets them apart from other people, but people with ASD may communicate, interact, behave, and learn in ways that are different from most other people. The learning, thinking, and problem-solving abilities of people with ASD can range from gifted to severely challenged. Some people with ASD need a lot of help in their daily lives; others need less.” In 2013, the DSM-5 (Diagnostic and Statistical Manual of Mental Disorders) replaced Autistic Disorder, Asperger’s Disorder and other pervasive developmental disorders with the umbrella diagnosis of autism spectrum disorder (ASD).

Because initial studies were all done by men with boys as subjects, women have been greatly misdiagnosed or missed diagnosis. The prevalence ratio is often cited as about 4 males for every 1 female diagnosed but newer research indicates that the ratio is closer to 3:1 or even 2:1. One in every 42 males and one in 189 females in the United States is diagnosed with autism spectrum disorder. Women are often discounted and labeled as weird, quirky, flighty, hypochondriac, intense, rude, over-dramatic, over-sensitive and self-sabotaging among other things.

“Camouflage: The Hidden Lives of Autistic Women” by Sarah Bargiela is a short (only 40 pages) and sweet, not to mention beautifully illustrated, graphic novel. It is a very basic introduction of what autism looks like in women. One of the points that this well researched book points out is that on average women are better at masking or learning how to conform to societal expectations — mostly by mirroring — but that masking can be very exhausting and lead to anxiety and depression.

According to “Safety Skills for Asperger Women” by Liane Holliday Willey, “Females with ASD often develop ‘coping mechanisms’ that can cover up the intrinsic difficulties they experience. They may mimic their peers, watch from the sidelines, use their intellect to figure out the best ways to remain undetected, and they will study, practice, and learn appropriate approaches to social situations. Sounds easy enough, but in fact these strategies take a lot of work and can more often than not lead to exhaustion, withdrawal, anxiety, selective mutism, and depression.”

Another great book that offers personal examples as well as a lot of research is “Autism in Heels: The Untold Story of a Female Life on the Spectrum” by Jennifer O’Toole. She has become one of autism’s most prominent figures. She was not diagnosed with Asperger’s syndrome until the age of thirty-five. She says, “It’s wondering … always wondering and never understanding: how can I be so smart and still feel so stupid?” After acknowledging her autism, things finally made sense for her for the first time in her life.

Here is a personal account from “What Every Autistic Girl Wishes Her Parent Knew” published by the Autism Women’s Network: “I feel intensely. I smell mold and bad food before others. I hear fluorescent lights. Clothing hurts, noises invade, colors take my breath away. My daily reality is governed by too much sensation and not enough sensation. Patterns are soothing because they create order in what feels like chaos. Sometimes I shut down and I lose language. Other times I get overloaded and act it out in ways that get me in trouble. My world is intense, rich, real, sometimes painful and definitely different.”

And why would anyone want to embrace an autism diagnosis? The best analogy that I have seen is that it’s very comforting (and not just a little bit helpful) to learn that you are a penguin among eagles and should swim instead of fly. It’s also helpful in accessing support and finding community. I should probably let you know that there is a prominent national organization (which shall remain unnamed) that many in the autistic community view as a hate group because it promotes autism as a disease rather than a difference and advocates for harsh treatments. So do be aware and do your research if you want to give or get support from any group. Most social platforms have autistic communities that are fairly easy to find.

You can also find autism support and education through the following groups:

For more books on autism in women, both nonfiction and fiction, you can check out this list.