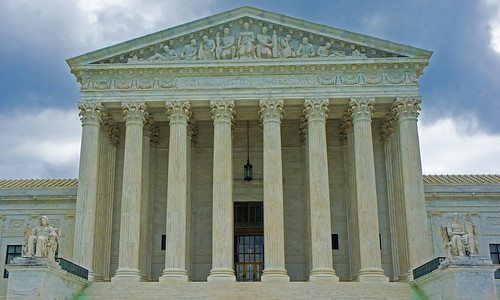 With Justice Anthony Kennedy’s retirement, there has been much debate about the role of the Supreme Court of the United States in shaping American policy and whether the process of appointing new justices has become too politicized. Are these new characteristics of the court or have they always been a part of the equation? The Supreme Court was established in 1789 and first convened in 1790. It had no real home and little prestige during the first 10 years of its existence. Pivotal to the court’s growth of power and status was the appointment of Chief Justice John James Marshall in 1801. During his tenure, the court made several important rulings including Marbury v. Madison and McCulloch v. Maryland. In the decades since, the status and influence of the court has continued to grow.

The history of the court and how it became the influential entity it is today is explored in Richard J. Regan’s “A Constitutional History of the U.S. Supreme Court.” Regan’s factual approach offers a concise overview of the court’s history through biographies of justices and chapters on pivotal cases with highlights of concurring and dissenting opinions. Readers should gain a comprehensive understanding of the court’s history and its role in society.

Joel Richard Paul takes a more intimate approach to the court’s growth with his animated biography on one of the most influential justices, John Marshall. “Without Precedent: Chief Justice John Marshall and His Times” provides a comprehensive picture of Marshall’s life. Paul’s focus on Marshall’s career before his appointment to the court sets the foundation for the visionary role he assumed. The author describes Marshall’s life and decisions on the court within the social and cultural context of the time period. Although the book is over 500 pages, it is written in an approachable and straightforward manner.

Also fascinating is the complex and layered process required for a case to actually be heard by the Supreme Court. Richard Kluger’s iconic “Simple Justice”

lays out the definitive history of the landmark case, Brown v. the Board of Education. With comprehensive clarity, Kluger illustrates the painstaking process of setting precedents, case by case, to finally culminate in the supreme legal challenge to current law. Kluger covers each step of the process within the psychosocial arena of race and culture that permeated each legal endeavor. Although this is nonfiction, it reads like a novel and has fascinating information about the parties involved with a particular focus on the work of Thurgood Marshall (the first African American Supreme Court Justice), Charles Houston and William Hastie.

For those who question the court’s ability to remain impartial, former assistant U.S. attorney James D. Zirin’s “Supremely Partisan” offers a wealth of information about its history and what he believes is the inherently partisan nature of the court. Zirin argues that the politicization of the court has made it a much sought after tool to turn ideology and personal beliefs into permanent law. It is written for the lay reader and provides a history of the court with many interesting stories about specific cases and court personalities.

Melvin I.Urofsky’s “Dissent and the Supreme Court: Its Role in the Court’s History and the Nation’s Constitutional Dialogue” is a timely presentation focusing on the power of dissent and its role in influencing U.S. domestic policy and constitutional dialogue. It is at once a history of the court and a fascinating look at the personalities of the justices and their dissenting opinions. Urofsky shows the importance of dissenting opinions and their effect as a catalyst in awakening and/or revitalizing social and political ideologies.

Erwin Chemerinsky enters the debate about the need to overhaul the Supreme Court in “The Case Against the Supreme Court.” Chemerinsky provides a scholarly argument against the historical and present day court. He outlines a history of what he perceives as missed opportunities and errors tied to current morality and politics. He argues that judicial decisions are inherently biased based on each justice’s personal and political leanings. He completes this book with suggested changes that would limit the effects of this bias and increase the functionality and objectivity of the court.

Finally, in “The Court and the World,” Justice Stephen G. Breyer emphasizes the need for an increased understanding of foreign law in our legal system. In a world made smaller and more connected by technology, as well as political and economic relationships, Breyer points out that the Supreme Court rulings are increasingly impacted by foreign law. The number of cases with foreign and international connections will continue to grow and our laws and Supreme Court justices must adapt.