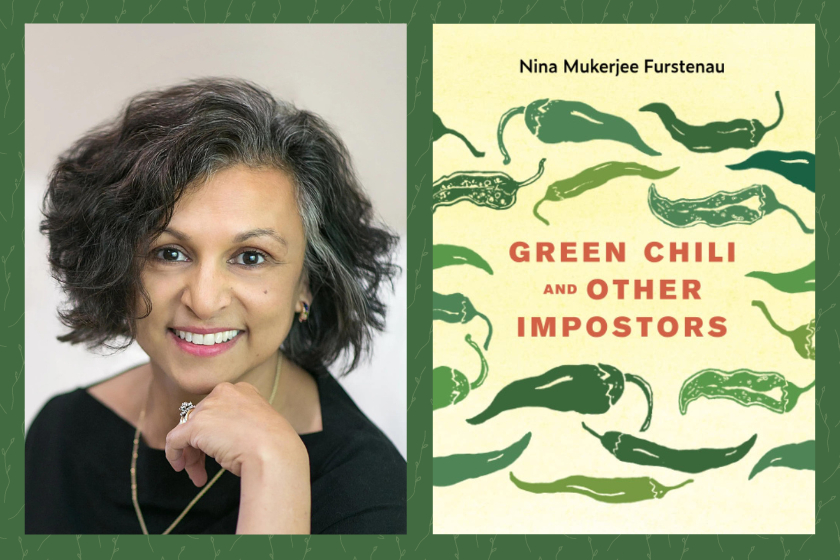 Nina Mukerjee Furstenau is a Columbia, MO author whose latest book is “Green Chili and Other Impostors.” The book focuses on food stories within the Indian subcontinent, but also mixes in memoir, travelogue, and history, with several recipes included throughout. Furstenau is a journalist, author, and editor of the FoodStory book series for the University of Iowa Press. Other published works include “Biting Through the Skin,” “Tasty! Mozambique,” “Savor Missouri” and numerous stories and essays for newspapers and magazines. Nina was kind enough to take the time to be interviewed via email.

Daniel Boone Regional Library: How did you prepare for your travel to India as a Fullbright Scholar to research this book?

Nina Mukerjee Furstenau: To write “Green Chili & Other Impostors,” I wanted a better understanding of the food trails of northeast India and how those ingredients moved around the world, especially under colonialism. To help me prepare before I left, I began to research those foods and how they altered cuisines both in India and elsewhere. When I arrived in India I had a general idea of the heritage flavors of the region because of my family history, but my early research certainly helped. Plus, I wanted to connect not only with food historians but cooks — both chefs and home experts — as well as locate the producers of some of those heritage foods. Food research for me is best when combined with actually tasting the foods, making them, meeting the producers on the farm, and gaining a perspective of the seasons and climate. Boots, or in my case sandals, on the ground is essential. Coming from the U.S., the U.S. Fulbright organization in India was very helpful in opening doors that would have been challenging to arrange on my own.

DBRL: You included many recipes in the book. Do you have a favorite? Were there some recipes that you had to exclude for one reason or another?

Furstenau: It’s really hard to pick a favorite recipe! What sounds good one day is often tied to what mood I’m in, the weather, who is eating with me, and what they like. But for an easy, week-day dish I’d pick Moong Dal with Gondhoraj Lebu. Lentils are a favorite of mine and even though I don’t have gondhoraj limes in Missouri, the limes you find in local grocery stores substitute pretty well. Citrus has a way of lifting the flavors in the lentils in surprising ways. It’s a great comfort food.

I didn’t have to exclude any recipes, but I did offer substitutions, especially in the case of the fish dishes. Bengal has so many tasty freshwater fish varieties that are hard to find here.

DBRL: Food writing can sometimes focus on upper-class concerns and taste, but your writing seems to be more egalitarian in nature. Is this something you strive for in your work, or is it just something that comes to you naturally?

Furstenau: My approach comes from how I was raised in the American Midwest. Growing up in Kansas in the 1960s and 70s, meant that some ingredients were just not available for my mom’s Indian recipes. She had a way of staying true to the flavor and texture profile of a dish even with challenges, though. What I learned was that ingenuity in the kitchen is key to making foods tasty, and I learned it’s no good having an amazing recipe if no one can find the ingredients, or a recipe that takes fancy equipment to make correctly.

DBRL: Your book is the first in the series of FoodStory books published by the University of Iowa Press, and you yourself are also the series editor. How did the FoodStory series come about?

Furstenau: A few years after my first book, “Biting Through the Skin: An Indian Kitchen in America’s Heartland” was published and began getting national attention, I suggested to the University of Iowa Press that a series on food, identity, history, and culture (aka Foodstory) would be a great topic area for a book series, and they agreed. When I was asked to submit my latest book, “Green Chili and Other Impostors,” by the director of the Press, it fit well within the subject and was placed in the series. Thankfully, I had no role in that decision!

Furstenau: So many. But if food, personal story, and migration is of interest I can highly recommend “Khabaar: An Immigrant Journey of Food, Memory, and Family” by Madhushree Ghosh. Her book is coming out of the FoodStory book series at the University of Iowa Press and is well worth your time. Plus, there are recipes!

Furstenau: Your favorite bookseller locally. Readers can also find it listed with online sellers or directly from the University of Iowa Press.