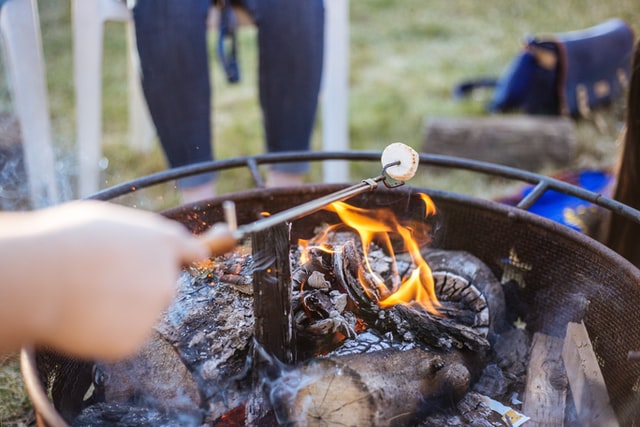 Summertime is camping time, for those that like that sort of thing. My idea of “roughing it” is staying in a hotel that doesn’t have a heated pool. Well, just because you sleep in the wild, doesn’t mean you have to eat like an animal. I’ve made a list of titles on the subject.

Before I started, I assumed there were three styles of camp cooking: 1) Minimalist/one-pot cooking using a fire with one cooking pan. 2) Dehydrated items to avoid needing a fire and cooking tools. 3) Bring food, pans, dishes, while attempting to keep perishable foods outside the danger zone. This last style requires more specific planning to avoid food spoilage. I was not entirely too far off on these assumptions, but the authors certainly flexed their creativity muscles to expand potential meals from the classic hot dogs and beans.

I looked at three books, coincidentally, each covered a different approach: “The New Trailside Cookbook” by Kevin Callan & Margaret Howard, “The Camp & Cabin Cookbook” by Laura Bashar and finally, “The Outdoor Adventure Cookbook” by Coleman (the cooler/camping company). Starting with “The New Trailside Cookbook,” we look at a small book filled with recipes, ingredient suggestions, menu planning tips and more. One thing that slightly annoyed me was the use of a symbol to show an ingredient could be dehydrated. The symbol itself was pretty obvious, but the guide was on the publisher page, a page often overlooked by readers. Rather than focusing on the food, the pictures mostly showed the equipment needed for successful camp cooking. The scaling for the recipes lacks consistency, ranging from two portions up to eight. Though the pictures are few, it is more than made up for by including metric measurements. (We really need to join the rest of the world and convert to metric.) The compact feel of this book suggests it be taken with you on a hike. Also, this book does a great job discussing how to choose lightweight equipment, the dangers of contaminated water (yikes!), deterring bears from invading your campsite and even covers cold-weather survivalist camping. The target audience seems to be campers who will be moving frequently. The next title I looked at was “The Camp & Cabin Cookbook.” This may be my favorite, but one negative is that it is hardcover and not efficient with use of space. The pictures are very nice and the recipes are generally scaled to serve four to eight. One distinct difference with the material covered is the focus on building a proper cooking fire, with either wood or charcoal briquettes. Interestingly, the author likes to cook using a Dutch Oven, so there is a section devoted to the care of cast iron. So, in some ways, this book had many similarities to the previous title. The target audience is someone with a dedicated camp location, a place where you’ll be set up for a few days, you know, like at a camp or in a cabin. “The Outdoor Adventure Cookbook” is my least favorite, I guess. It seems unnecessarily large and with wasted space on the borders of the pages, compared to “The New Trailside Cookbook,” not something you would want in your pack. The recipes don’t evoke “camp food,” the limitations of camping are not applied to these recipes. I will admit, there are some nice tips included, but overall the book feels like a glorified advertisement. This title is for those who have a large camper or are essentially bringing a full kitchen with them (that’s not exactly a criticism, see my thoughts above on camping).

If you’re the type for outdoor cooking, hopefully either these titles or something from the list can provide inspiration for your next camping trip or backyard get-together.