Skip to content
Home / Adults / Read the Recipe! Food Is a Weapon This month, I am looking at a fascinating collection of recipes, stories, interviews, visual art and essays: “Ghetto Gastro: The Black Power Kitchen” is an amazing book written by three Bronx natives. The text is peppered with wisdom, enlightenment and that Bronx voice. Oh, and some seriously good recipes.

There is so much to like about this book, there’s so much to learn from this book and there’s so much to be inspired by from this book. From the art, the photographs, the interviews, it makes the recipes almost become secondary. In fact, I will inject here that I think the recipes ARE secondary, what I gathered from the text and illustrations was a goal of shifting a mentality. One of those steps is to move away from a meat-based diet. Many of the meals use plant-based options, though there are some items that cannot be replaced, e.g., fish and a very tempting jerk chicken selection.

(Please pardon the length of the following extended quote. I feel it is important and, in good conscience, I cannot summarize or change these words, it’s not my place to speak here.)

Food is a weapon.

Let’s first deal with what usually needs to be dealt with. Our name makes a lot of people uncomfortable. It’s not our intent to polarize for the sake of ceremony. In fact, we were all young boys when we learned our existence itself could be polarizing to folks who didn’t know us. “Ghetto” is used as a derogatory term to dismiss and separate cultures from their mainstream counterparts. Ghetto is used as a way to cue discomfort, to cue the Other. When that unknowable thing is over there, you don’t have to deal with it, you don’t have to be with it. That’s what ghetto is supposed to do-dehumanize.

You recognize this unsettling feeling because you might not be sure if it’s polite to say the words Ghetto Gastro. (You can and we hope you do. Watch out, though, say it three times fast and we just might run down on you. Ya dig.)

You feel this discomfort because you might have worked tirelessly to get out of the ghetto, surviving difficult circumstances to create a more sustainable life. Or you might wonder why someone would be proud to claim an identifier that could sound off-putting to outsiders. You might already have a sense of what we’re up to but might question our credibility. We get it. It’s wise to be suspicious. Ghetto has been whitewashed and commodified, used for gimmicks and a particularly Americanized performance of Blackness. (You can look to projects like Thug Kitchen, authored by a white duo with zero appreciation for the criticism they received at the time, for a pulse on what we do not cosign or respect. After brother George Floyd was murdered by police in the streets of Minneapolis, the brand changed their name.)

It’s simple. For us, ghetto means home. It’s a way to locate our people, not just in the Bronx of New York City, where we as a group formed (more on that in a moment). It’s a way for us to connect with our folks in the Global South, whether their ghettos are called the hood, the slums, the projects, or the inner city. When we say “ghetto”, we are saying to our people “we see you” while simultaneously indicating the systems of neglect and apathy that created the conditions we’ve been forced to reckon with.

In the ghetto, food is a denominator of class and a reminder of what you can and can’t have. Food is weaponized against people in the ghetto when they have easier access to soda and chips than fresh produce. When subsidized commodities like sugar, wheat, and soy make buying oranges and greens unaffordable, something is deeply wrong. Food weaponized against people is watching generation after generation fall to diabetes and cardiovascular disease. These are our people. And for decades they’ve been given an unfair shake.

Ghetto isn’t just about struggle and disenfranchisement, though. Ghetto is the flower blooming in the sidewalk cracks. Ghetto is our love language, a patois so specific and rooted in place that if you know, you can hear when someone is from the Bronx or Brooklyn or Harlem. Ghetto is our aura, our style, our stease. It’s our music, our beats, built on the backbones of jazz, rhythm and blues, and dancehall. There’s a reason why Donny Hathaway, Stevie Wonder, and Rick James all sang songs about the ghetto.

Ghetto isn’t about excluding people. It’s about telling the rest of the world, we are here, we’ve been here. We’re going to serve what we feel like dishing out especially when many fail to acknowledge our existence.

Ghetto is so you don’t forget who you’re talking to. Ghetto is so we center where we’re from and why we do what we do.

Ok, now on to my thoughts on a couple of recipes. 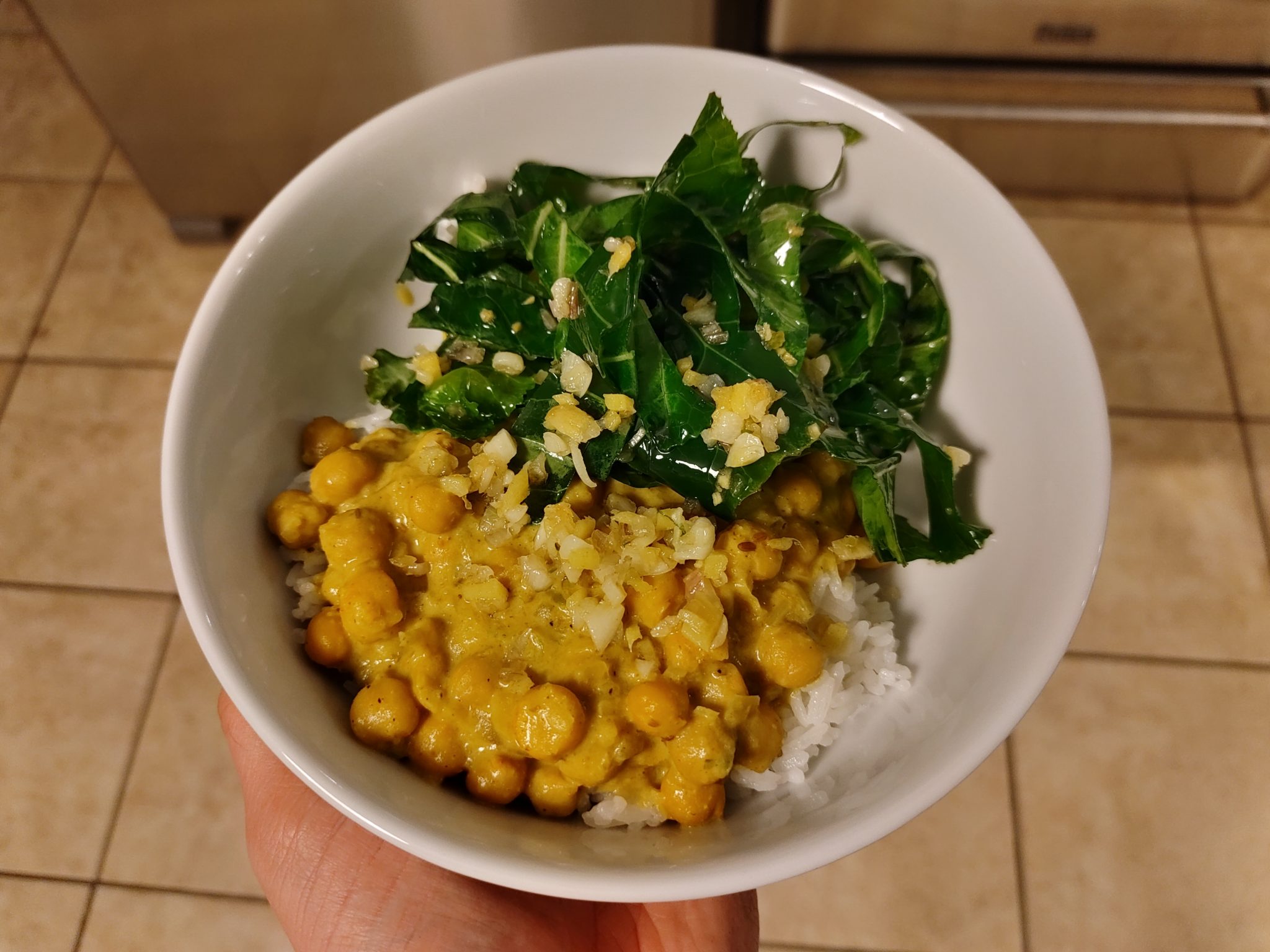 I made a meal for my partner and a couple of friends. I was cooking gluten-free and vegan, so my choices were a bit limited. My choice was Curry Chickpeas and State Greens (a version of collard greens). The curry chickpeas have a smooth, deep warming curry flavor with a solid amount of spice (though, the next day, the spice has bloomed to near fire-breathing status). The state greens/collard greens were subtly complex with toasted sesame oil, ginger, honey and liquid aminos pulling their weight. 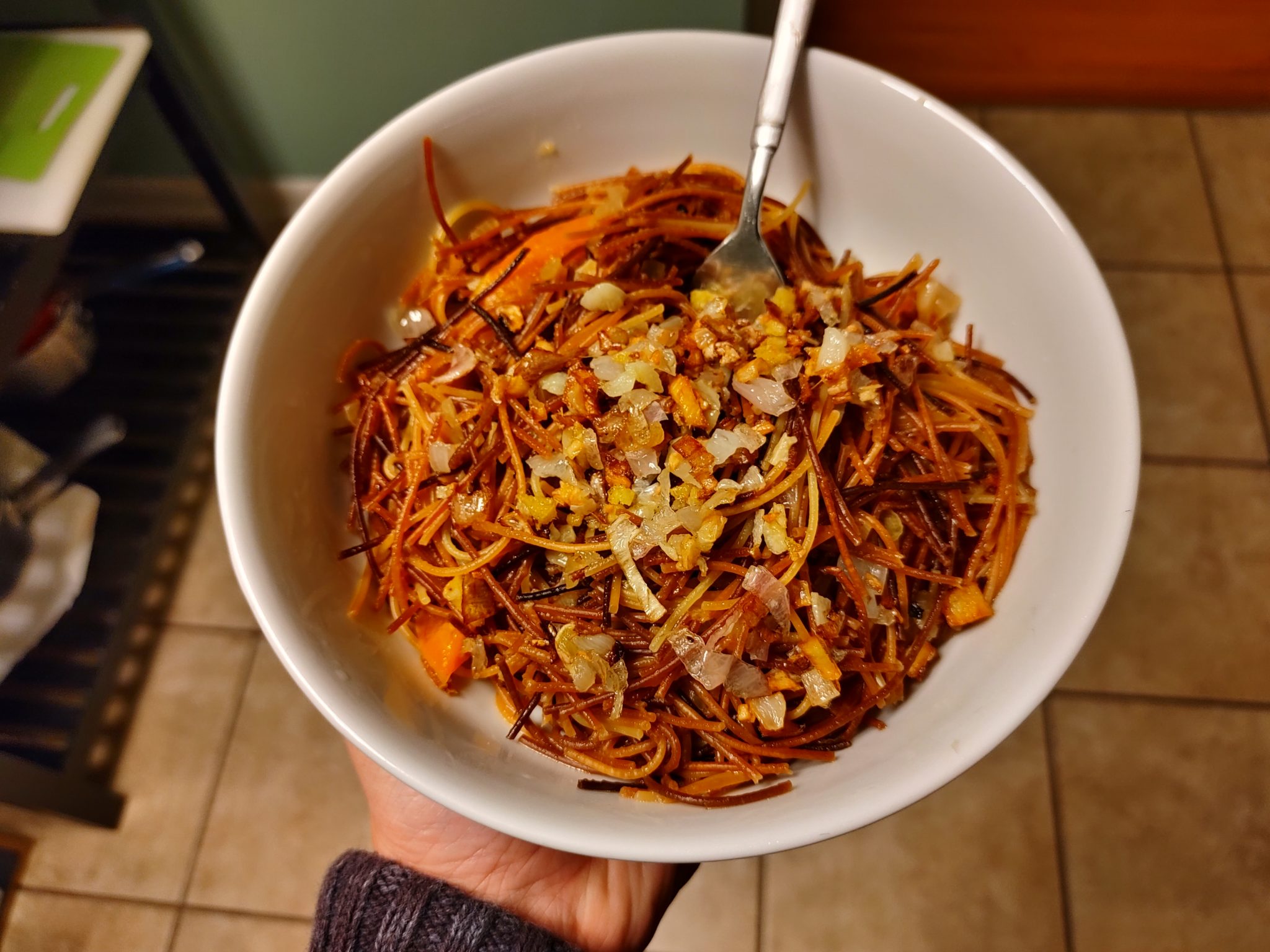 My partner was equally inspired and made a dish from the book, too. She made Chili Lime Liberation Pasta, and it was fantastic. A nice balance of citrus and spice with the weight of light pasta makes for a nearly complete meal in a single dish.

Some powerful writing is in these pages; do yourself a favor, slow down and take some time with the contents. Yes, you will learn some great recipes and your culinary palette will expand but more importantly, you may look at your meals and eating habits in a new light.