It has been 10 years since Congress last raised the federal minimum wage to $7.25, and workers are still demanding better, family-supporting pay across America. Since 2012, movements like “Fight for Fifteen” have demonstrated that working for the current minimum wage cannot meet the cost of living, causing workers to call for incomes that reflect a “living wage.” This means pay that covers staple expenses like housing, child care, food, transportation, health care and other basic needs. Showing just how out of sync the minimum wage is with sustaining an ordinary lifestyle, the Living Wage Calculator* measures these average costs for different towns and family makeups to estimate the amount of money people should earn to afford their necessities. For the base-line single person in Columbia, that number is currently $11.13.

Recently, various initiatives for increasing the minimum wage have made headlines at the local, state and national levels, with the House of Representatives last month passing a gradual increase to $15 by 2025. While the bill is unlikely to make it to the president’s desk, and this change would apparently not keep up with inflation, the topic of stagnant and insufficient wages may very well be on voters’ minds during the 2020 state and national elections. So the time is ripe for reading up on this subject, from testimonies showing the inefficacy of surviving on the minimum wage to the organizing efforts that have helped deliver living wages in motivated communities.

*Note that, owing to voters’ approval of Proposition B last fall, the current minimum wage for Columbia (and the rest of Missouri) is $8.60. The Living Wage Calculator has not yet updated these minimum wage statistics.

“The Pleasures and Sorrows of Work” by Alain de Botton

Books about surviving on or below the minimum wage

“Nickel and Dimed: On (not) Getting by in America” by Barbara Ehrenreich

“I am realizing that … one job will never be enough. In the new version of supply and demand, jobs are so cheap — measured by the pay — that a worker is encouraged to take on as many of them as she possibly can.” 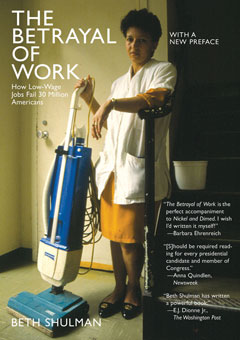 “The Betrayal of Work: How Low-wage Jobs Fail 30 Million Americans And Their Families” by Beth Shulman

“Behind the Kitchen Door” by Saru Jayaraman

“The Working Poor: Invisible in America” by David K. Shipler

Material about labor activism and achieving a living wage standard

“A Living Wage” by Lawrence Glickman

“The Fight for Fifteen: The Right Wage for a Working America” by David Rolf

“Beyond $15: Immigrant Workers, Faith Activists, and the Revival of the Labor Movement” by Jonathan Rosenblum

“All Labor Has Dignity” by Dr. Martin Luther King Jr. and Michael Honey

“Gateway to Equality: Black Women and the Struggle for Economic Justice in St. Louis” by Dr. Keona Ervin