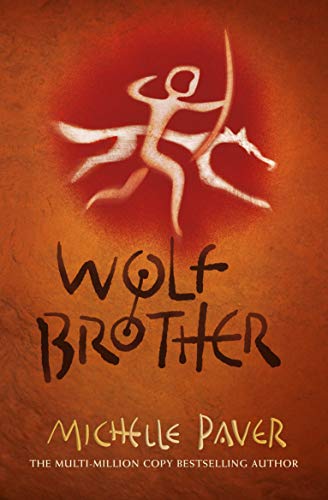 Six thousand years ago, in pre-agricultural Europe (northern Scandinavia, to be exact) the people of the Forest live in clans, each represented by a particular animal or life form. This is the setting for Michelle Paver’s “Wolf Brother,” the first novel in her Chronicles of Ancient Darkness series. The story kicks off with a jolt, as twelve-year-old Torak, of the Wolf Clan, is bolted awake by a giant bear attacking his father and smashing their shelter to splinters. By the time Torak realizes what has happened, the bear has vanished and his father has suffered fatal wounds. Before his father dies, he tells Torak that the bear was possessed by a demon from the Otherworld, and that “with each kill — its power will grow.” He makes Torak promise to travel north to the Mountain of the World Spirit and tells him that his ‘guide’ will find him and help him on his quest. Quickly packing up some of his belongings, Torak reluctantly leaves his father as he hears the bear return and sets off on his quest.

Torak soon finds an orphaned wolf cub, whom he discovers he can communicate with, and he eventually realizes that the cub is likely the guide his father spoke of. Along the way, he also encounters Renn, a girl from the Raven Clan, who, though adversarial at first, becomes his friend and accompanies him on his journey to try to kill the bear and face down the Soul Eaters, a group of rogue mages, or magicians, who turned to evil and imbued the bear with a malevolent spirit in order to kill Torak’s father.

Fast-moving and filled with thrilling chases and scary moments, this is a great novel for older grade-school readers that conjures up a prehistoric world in a clear and accessible way. It’s also a rousing beginning to Paver’s nine-book series, which continues with “Spirit Walker.”