Have you ever taken a drive through the countryside in Mid-Missouri and were amazed at the vast lawns that people spend hours mowing, which otherwise could be used as arable land? Have you ever thought about the possibilities of “farming your yard,” even a small patch of land in a nice sunny spot on your front lawn? Did you know that most of the food that we enjoy invariably comes at a high fuel cost?

Each Earth Day we reflect on many different perspectives for how climate change can be mitigated. Some believe that producing a chemical cloud across the planet, thus reducing the heat of the sun, would be a good thing. Others feel that drastic policy measures on a global scale must be made. The Kyoto and Paris Accords, for instance, are a great examples of monolithic recommendations that would happen on a unfathomably large policy scale. However, what if the climate problems aren’t merely so fixable by pure policy? Perhaps they are also fixable though our attitudes toward human existence itself. Some thinkers believe that many of our environmentally destructive behaviors are actually created by globalism, manic consumerism and unfettered technological advances. Many writers, some of them quite obscure, others lost in the mists of time, have called for something slightly less futuristic to combat climate change: a return to localism.

Perhaps the best known book on this subject is a classic that will soon be 50 years old. “Small is Beautiful: Economics as if People Mattered,” by E.F. Schumacher, was written during a time when the environmental movement was just gaining steam, and has influenced generations of organic farmers, environmentalists, and permaculture enthusiasts and was the main reason the “Whole Earth Catalog” was put into print. Schumacher believed that late 20th century life was becoming wildly out of balance with nature. Although dated in some respects (the Burmese laborers he examines in detail in retrospect lived quite brutal and unhealthy lives) his critique of global fuel consumption and industrial output is still utterly relevant. Indeed, what Schumacher was talking about was something even more radical than policy change; he was calling for a wholly different way of living life. A more contemporary take on these ideas are found in the book “Human Permaculture” by Bernard Alonso and Cecile Guiochon.

Another proponent of localism is found in the work of the American environmentalist and cultural critic Wendell Berry. A keen skeptic of global capitalism and out of control consumerism, Berry is particularly interested in the idea of place. From his farm in Kentucky, Berry has penned many of the most trenchant arguments for a return to localism. A good place to start is in a compendium of some of his best essays called “The World-Ending Fire: The Essential Wendell Berry.” 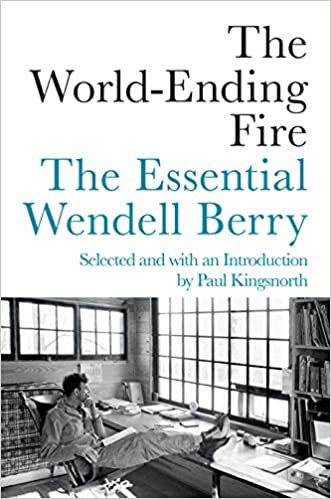 The philosophy of distributism, far outside of mainstream economic and political thought, is the ideal that influenced “Small is Beautiful” the most. For lack of a better description, distributism emerged initially from a piece of Catholic Social thought promoted in a late 19th century Papal Encyclical, and was further promoted in the 1930s by GK Chesterton and Hilaire Belloc. As time has moved on, however, it has been embraced by neo-luddites and green parties, who could see that the materialism and theories of production embedded in both Marxism and capitalism were deeply flawed and a grave cause of the environmental collapse in many places in the world. The volume that best describes what distributism actually is can be found on our shelves here: “Beyond Capitalism & Socialism: A Statement of An Old Ideal: A Twenty-First Century Apologia for Social and Economic Sanity.” Don’t miss the famous neo-Luddite Kirkpatrick Sale’s introduction to this slim but important volume.

Finally, speaking of Sale, (who recently just barely lost a bet on whether or not technology would have a deleterious or beneficial effect on humankind by 2020), please listen to this wonderful discussion about a person’s sense of place in the natural world. “Deep Ecology for the 21st Century, Part 9: The Bioregional Perspective,” recorded over 20 years ago, is an early podcast that included Sale and environmental writer, counter-cultural critic and environmentalist Stephanie Mills. It reminds us that these old ideas about place, society and our own backyard are actually quite revolutionary.