“The Summer Before the War” by Helen Simonson
“Fans of Simonson’s ‘Major Pettigrew’s Last Stand‘ have reason to rejoice. She has created another engaging novel full of winsome characters, this time set during the summer before the outbreak of World War I. Follow the story of headstrong, independent Beatrice Nash and kind but stuffy surgeon-in-training Hugh Grange along with his formidable Aunt Agatha. Make a cup of tea, and prepare to savor every page!” – Paulette Brooks, Elm Grove Public Library, Elm Grove, WI END_OF_DOCUMENT_TOKEN_TO_BE_REPLACED

In recent years, video games have risen to prominence as a storytelling medium, engaging people young and old. These documentaries take a look at video games and how we deal with them in the real world.

Unprecedented rivalry rocks the electronic world to its core. This film follows novice gamer Steve Wiebe on his quest to destroy the top score of gaming legend Billy Mitchell, the uncontested champion of the Donkey Kong world for over 20 years. Only one can truly claim the title King of Kong. END_OF_DOCUMENT_TOKEN_TO_BE_REPLACED

END_OF_DOCUMENT_TOKEN_TO_BE_REPLACED

Last year, Alzheimer’s was much discussed in popular media, as Julianne Moore won all of the awards for her portrayal of a 50-year-old linguistics professor with the early onset form of the disease, in the movie “Still Alice.” The movie was based on Lisa Genova’s novel of the same title. Genova, a neuroscientist as well as an author, knew what she was about in portraying the effects of a condition that strips away your memory.

A diagnosis of Alzheimer’s disease can seem overwhelming for the patient and family members. But support and information are available. Below are some helpful resources for those coping with dementia, as well as their caregivers. END_OF_DOCUMENT_TOKEN_TO_BE_REPLACED

“Downton Abbey”
Season 6
Website / Reviews
The year is 1925. Momentous changes threaten the great house, its owners and its servants, while past scandals continue to loom. Return to the sumptuous setting of Downton Abbey for the sixth and final season to discover what will finally become of the Crawley family.

END_OF_DOCUMENT_TOKEN_TO_BE_REPLACED

Readers interested in Edison’s many inventions may want to check out Leonard DeGraaf’s book, “Edison and the Rise of Innovation.” DeGraaf serves as the archivist for the Thomas Edison National Historical Park and draws from the collection he oversees to give readers an image-filled guide to Edison’s life and work. From photos of Edison’s workplace in Menlo Park, to drawings and diagrams of his many creations, DeGraaf illustrates the broad scope of Edison’s creativity. END_OF_DOCUMENT_TOKEN_TO_BE_REPLACED

“The Family Tree: A Lynching in Georgia, a Legacy of Secrets, and My Search for the Truth” by Karen Branan
A provocative true account of the hanging of four black people by a white lynch mob in 1912 is written by a descendant of the sheriff charged with protecting them and draws on diaries and letters to piece together the events and motives that led up to the tragedy. END_OF_DOCUMENT_TOKEN_TO_BE_REPLACED My daughter, Samantha, and I joined a mother-daughter book club when she was in fourth grade. The club consisted of the two of us and Samantha’s best friend and her mother. That club lasted until we had to move just before the start of sixth grade. And even though we are now just a club of two, Samantha and I have continued reading books together. We are currently reading “Little Women” by Louisa May Alcott. (Samantha chooses the books even if I offer suggestions.) END_OF_DOCUMENT_TOKEN_TO_BE_REPLACED

There are numerous books on the topic, and Sandra Tsing Loh read most of them as she tried to cope with her “year of raging hormones.” Employing caustic wit, she shares her newfound wisdom in “The Madwoman in the Volvo” (W.W. Norton, 2014). Loh had a whopper of a midlife crisis, containing every essential element: affair, divorce, adolescent children, eccentric elderly parents and over-sized emotions. The only thing she found easy was gaining weight. The memoir ends on an encouraging note, however, and along the way Loh provides one of my favorite tips for getting through this difficult time. Eat a snack around four p.m. END_OF_DOCUMENT_TOKEN_TO_BE_REPLACED 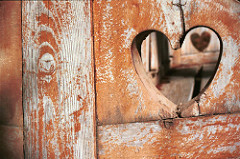 Valentine’s Day is not the sole domain of those enveloped in romantic love, though that does seem to be the emphasis. (Notice the numerous advertisements that run for heart-shaped boxes of chocolates, bouquets of roses and dinner reservations for two in the weeks approaching February 14.) But this red-letter day, designated to celebrate love, is fair game for everyone. After all, love takes many forms and evolves in stages across all kinds of relationships – between friends, parents and children, siblings and so on.

Seeking to expand beyond this romantic aspect of Valentine’s Day (but not wanting to exclude it), I decided to treat the library’s online catalog as an oracle and ask her (or him, or them???) to provide some alternative material to use in recognizing this day of love and also to address the varying places the human heart might find itself on the love continuum. So I typed in “heart, states, matters, heal, love and poetry” in the keyword search bar and waited patiently for a response. The answer divined from our cyber sage was a wonderfully varied list of titles that deal with the spiritual, physical and emotional realms of the heart. END_OF_DOCUMENT_TOKEN_TO_BE_REPLACED